Equestrian statue of Michael the Brave

Mihai Viteazul – Romanian ruler from the Medieval period, who tried for the first time to unite the Romanian provinces.

The statue is located in the centre of the square bearing its name, and is surrounded by a small park.

The equestrian statue of Michael the Brave (7 m high) is mounted on a 4.7 m high pedestal standing on a platform equipped with three access ramps, which is decorated with bas-reliefs illustrating the fight against the Turks and the Union of Moldavia, Transylvania and Wallachia. The pedestal of the statue bears the seal of Michael the Brave, comprising the coats of arms of Moldavia, Wallachia, and Transylvania.

Initially, two maquettes (by sculptors Marius Butunoiu and Oscar Han) won the public competition for erecting a statue of Michael the Brave in Alba Iulia on the occasion of the 50th anniversary of the Union of Transylvania with Romania. Following a top-level state decision, the statue by Oscar Han was placed in Alba Iulia, while the work by Marius Butunoiu was supposed to be unveiled either in Șelimbăr (were the Prince left for from Alba Iulia) or in Călugăreni (from where Konan Sinan Pasha left, heading to Alba Iulia). After having debated at length over the matter, Nicolae Ceaușescu, the country’s president, decided that the statue should be mounted in Cluj, as it would add value to Romanian history being celebrated in the city. As such, the sculpture by Marius Butunoiu was unveiled in Cluj on 17 December 1976.

Given the advanced state of decay of the pedestal, with several plaques falling to the ground, as well as the signs of an impending sinkhole, in 2018, on the occasion of the 100th anniversary of the Great Union, local authorities carried out consolidation, conservation and restoration works on the equestrian statue of Michael the Brave.

The equestrian statue of Michael the Brave is one of the most important monuments in Cluj-Napoca. Wreaths are placed here annually on December 1, the National Day of Romania. 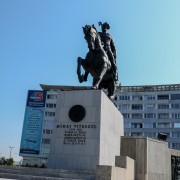 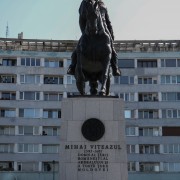 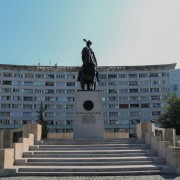