Márton Áron – Catholic bishop, imprisoned in the communist period, for his loyalty to his faith.

It is located in the central area of the city of Cluj-Napoca, at the intersection of the main drive routes, close to the statue of Matthias Corvinus, the Bánffy Palace, which houses the Art Museum, the former city hall building, the National Bank and the Continental Hotel.

The statue of Bishop Márton Áron is a 2.9 metre high work of bronze, which is placed on an socle with a height of 80 cm.

Bishop Márton Áron went down in history as one of the most representative figures who fought for the non-intervention of the state in the internal affairs of the Catholic Church. For his opposition against the concentration of Jews in ghettos and their deportation, the Institute for Holocaust Research at Yad Vashem from Jerusalem awarded him the title of Righteous Among Nations on 27 December 1999.

Bishop Márton Áron has remained in collective memory as a symbol for maintaining moral straightness and integrity within the Roman Catholic Church, in opposition to the communist regime. Place of celebration/commemoration for Roman Catholic believers, with wreaths being placed here annually to mark the anniversary of his birth and death. 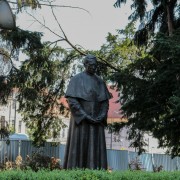 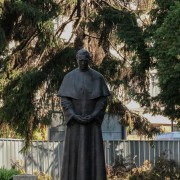