Iuliu Hossu, Greek Catholic Bishop of Gherla (1917-1930) and of Cluj-Gherla (1930-1970), member of the Governing Council of Transylvania, rightful senator in the Parliament of Great Romania, member of the Romanian Academy, was arrested in 1948 for refusing to convert to the Orthodox Church, beatified by the Catholic Church.

The statue of Cardinal Iuliu Hossu is located in the vicinity of the Greek Catholic Transfiguration Cathedral (Catedrala Schimbarea la Față), in the pedestrian area on Eroilor Boulevard in Cluj-Napoca, about 7 m away of the northern side of the street, next to the Capitoline Wolf statue and the water fountain.

FROM NOW ON, A GREATER ROMANIA, FOUNDED ON GOD’S RIGHTEOUSNESS AND THE FAITH OF ITS PEOPLE. JUSTICE AND TRUTH AT THE FOUNDATION OF UNITED ROMANIA (IULIU HOSSU)

The statue of Iuliu Hossu is about 2.6 metres high, showing the cardinal standing in a simple pose, dressed in a vintage priest cloak, as he reaches King Ferdinand I with the Acts of the Great Union. He is symbolically holding the roll of the document of December 1 from Alba Iulia in one hand, while his other hand is placed on his chest, as depicted in almost all illustrations, in a gesture typical of a high prelate. The statue is made of bronze.

The statue was erected at the initiative of the Greek Catholic Bishopric United with Rome of Cluj-Gherla. The costs were assessed at around EUR 70,000 and were covered entirely by the bishopric. The monument was unveiled on the 100th anniversary year of the Union, as an homage of the Greek Catholic Eparchy of Cluj-Gherla to the founders of Great Romania, and especially to Cardinal Iuliu Hossu, who was appointed by the Great National Council to read out the Resolution of the Union in front of the Great Assembly of 1 December 1918 in Alba Iuia. The unveiling ceremony was attended by local officials and by His Eminence Francesco Cardinal Monterisi, Archpriest Emeritus of the Saint Paul Outside-the-Walls Basilica in Rome.

Iuliu Hossu gained his rightful place in collective memory as one of the artisans of the 1918 Union, as well as a fighter for upholding the Greek Catholic religion and for his faith in the Union with Rome. He was named cardinal in pectore of the Catholic Church by Pope Saint Paul VI.

Place of commemoration of Cardinal Iuliu Hossu as a leading figure. Located in the heart of Cluj, it is one of the most visited monuments, especially as part of pilgrimages. 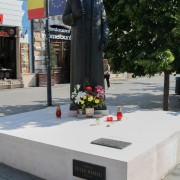