Space for Recollection and Prayer

In the memory of the political prisoners from the communist period.

The monument is located in the courtyard of the The Memorial to the Victims of Communism and to the Anticommunist Resistance, which is in the city center of Sighetu Maramţiei.

It is an underground chapel with an overhanging impluvium. Daylight shines through the cross cut into the centre of the cupola and is filtered by the veil of water from a basin with candles, casting the reflection of numerous crosses of light against the walls. Above the chapel are planted twelve apple trees. Along the ramp and on the high courtyard wall are mounted smoky andesite plaques engraved with the names of some of the thousands who died in the prisons and camps or during deportation.

The space was conceived as a place for recollection and prayer for visitors after they have seen the horrors of the communist repression described in the museum. The chapel was the winner of an architectural competition whose theme was a sentence that can be found in all the prison memoirs: 'I would not have endured if I had not believed in God'.
In 1996, an architectural competition (in which more than fifty architects of all generations took part) was held to choose the design for the only new structure to be added to the old prison building, in one of the inner courtyards.  The winner of the competition was a young architect, Radu Mihăilescu, and the name of the structure, a moving work of art, is 'Space for Prayer and Recollection', which combines ancient (the suggestion of a Greek tholos and a Christian catacomb) and modern. Both the competition and the implementation of the winning architectural design were made possible with the financial support of Mr Mişu Cârciog, a Romanian diplomat before the war, who later became a businessman in Britain. On the walls of the ramp that descends to the underground space have been engraved in smoky andesite almost eight thousand names of those who died in prisons, camps and deportation sites in Romania, to which have been added another 16,000 names inscribed on andesite plaques mounted on the walls of the inner courtyard

Space for meditation after visiting the Memorial to the Victims of Communism is part of the Sighet Memorial, Space for Recollection and Prayer is visited every year by thousands of tourists

The Memorial to the Victims of Communism and to the Resistance. Sighet, Romania. Guide and Activity, 1993-2014 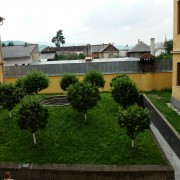 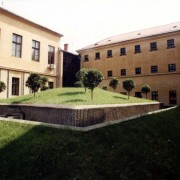 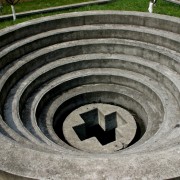 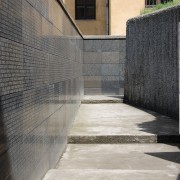 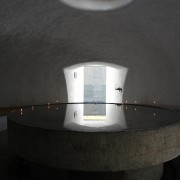