Transylvanian School – cultural movement from Transylvania, which had a great influence in the national awakening of Romanians

The 'Transylvanian Group' Sculpture School is located at the main entrance to Babeș Bolyai University, strada Mihail Kogălniceanu nr. 1, in the central area of the city. It is a five-minute walk away from Piața Unirii (Union Square) and Bulevardul Eroilor.

The monument portrays the three prominent figures of the enlightenment movement known as the 'Transylvanian School'. The three representative figures for this cultural movement are Samuil Micu, Gheorghe Șincai and Petru Maior. The statues are made of bronze, they are three meters tall and they sit on travertine pedestals with spaces designed for flowers. The names of the three figures and the years of the period when they lived are encrusted on a marble plaque set in front of the monument.

The monument built by sculptor Romulus Ladea was unveiled on 30 June 1973.

The monument on Mihail Kogălniceanu street is a homage to the three great personalities of this movement, whose works managed to awaken the national conscience of Romanians. Present in all tourist guides, it is one of the most frequently visited monuments in the city of Cluj. 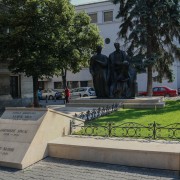 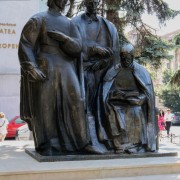