Statue of Queen Marie of Romania

The statue is located near the Queen Marie Theater, the Sztarill Palace, the former Panonnia Hotel, the bazaar building and the Poynar Palace.

The statue depicts Queen Marie standing and holding a document and the royal seal. The statue of the Queen is made of bronze, it is 2.6 m high and was mounted on a 2.5 m high rectangular plinth, coated with Baschioi stone and decorated with two sculpted girdles. The pedestal has two plaques made of bronze, bearing explanatory texts and Oradea's coat of arms. It is the work of sculptor Dumitru Paina.

Prince Radu and prince Nicolae unveiled the statue of Queen Marie, which was built by the Municipality of Oradea in front of the State Theater, in Ferdinand Square, where the monument had been placed in the interwar period.

The statue itself was erected by the Municipality of Oradea in front of the State Theatre, in Ferdinand Square, on the same spot where a statue of Queen Marie had existed in the interwar period.

It is a popular tourist destination among those visiting the city. 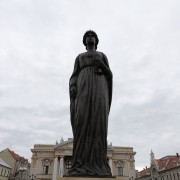 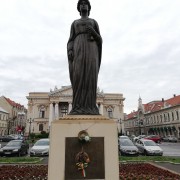 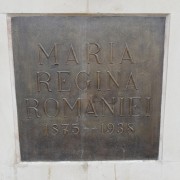