Victims of Communism. The work itself is part of a series of monuments belonging to the Revolution Memorial in Timișoara.

The location chosen for this monument is related to a tragic event at Decebal Bridge leading to Traian Square, where a woman died in her husband’s arms.

The Pity, 17 december 1989, Erected by the Association for the Memorial to the Revolution of December 1999

The sculpture refers to the time of the ordeal on the cross, with Virgin Mary taking Jesus down from the cross in the famous sculpture by Michelangelo. In this case, however, the feelings of love and protection are portrayed in a mirror image: here, a man embraces the woman in his protective arms. Sculptor Peter Jecza used bronze as material. The monument has following dimensions and was mounted on a marble pedestal: 440 x 160 x 120 cm.

The monument was unveiled in 1999, having been made by sculptor Peter Jecza as part of a series of 14 monuments dedicated to the Memorial to the Revolution in Timişoara, which honour the human sacrifice of December 1989.

The monument honours all women who died in the days of the Anticommunist Revolution. The sculpture portrays a woman leaning against a man’s shoulder. On 17 December 1989, the first victims of the Revolution, men, women and children, fell to the ground on the very same spot. The monument takes after a true story, that of a man carrying his wife in his arms after she was shot.

This monument, as well as the others in the series, was erected out of concern of the Revolution Memorial Association, so that the city would not forget its heroes. Wreaths are also laid here. 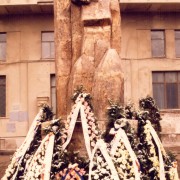