It is placed in the courtyard of the Adam-Müller-Guttenbrunn House, the first modern centre for the elderly people which started functioning in Romania in 1994.

Freedom, dignity and human rights are intangible spiritual values which must be protected at all times and everywhere

The monument of the people deported to the USSR is composed of a grey marble obelisk and a bilingual commemorative plaque (Romanian-German). It is approximately 2 meters high.

It is a place of commemoration for German victims deported to the USSR, being the first monument in Romania built in their memory.

There are annual events at the monument dedicated to the people deported to the USSR, as well as commemorative events, wreath ceremonies and lighting of candles. 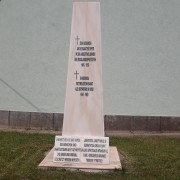