July 21st 1880 – May 4th 1919 died at airplane crash near Bratislava together with Royal italian sergeant U.Merlino and sol. G.Aggiunti dedicated to a great son of Czechoslovak nation by the liberated nation

Štefánik died at plane on May 4th 1919. 30000 people attended his funeral a week later on Bradlo. The founding stone of memorial was laid by the Minister of Foreign Affairs, Eduard Beneš, on 24th May 1924. The cairn was constructed between 1927 – 1928 on the Bradlo hill above the town of Brezová. This monument was designed by architect Dušan Jurkovič and in its composition, material, space is an exquisite example of the European monumental architecture at that time. The construction lasted 280 workdays. The travertine stone used for wall facing comes from Eastern Slovakia, Spiš region. In total, 194 stock cars transported the blocks to the location. The monument was unveiled on 23rd September 1928.

The cairn is a place of regular pious commemorations at anniversary of tragic death of General Milan Rastislav Štefánik, celebrations of the declaration of Czechoslovak Republic, a place of memory where thousands of people would pay homage to the extraordinary personality of Czechoslovak, Slovak and European history. In 1968 the cairn was declared a national cultural heritage. Its reconstruction started in 1988, lasted almost 7 years and was finished in 1996. In 2009 it was enlisted in European Culture Heritage due to Štefánik’s contribution to European history and high artistic value.

The Bradlo cairn is a symbol of the independence and freedom of Slovak nation and a memorial of crucial historic event when the Slovaks became free nation. The Bradlo memorial definitely serves as a place of memory of the Slovak nation. Every year in May national commemoration festivities take place here. In 2019 marks 100th anniversary of Štefánik‘s tragic death. Mohyla is a popular place for short trips and excursions in every season. It is easily accessible by 4km route. Near the monument there is a cottage Bradlo offering refreshment and suvenirs. Guided tours can be booked at Brezová pod Bradlom. 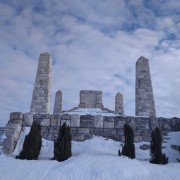 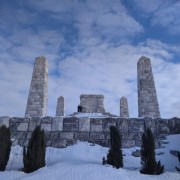 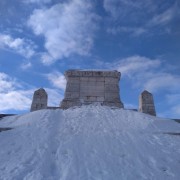 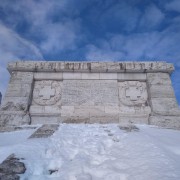 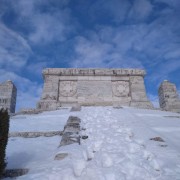 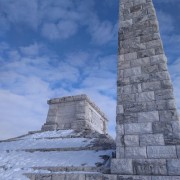 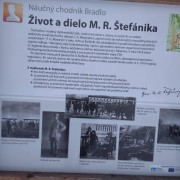 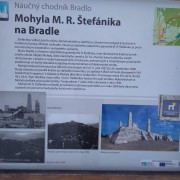