Milan Rastislav Štefánik - an outstanding personality in Slovak history. Diplomat, astronomer, widely travelled scientist, one of the founders of Czechoslovakia in 1918 and as such – a symbol of the idea of czechoslovakism.

In the middle of little square surrounded by Slovak National Theatre and a shopping centre Eurovea by the river Danube in Slovak capital Bratislava.

On the pillars there are three bronze tablets. The signature on the front side of the pylon is:

On the back side of the monument there is bronze tablet with this inscription:

MEMORIAL OF MILAN RASTISLAV STEFANIK RECONSTRUCTED AT THE 90TH ANNIVERSARY OF TRAGIC DEATH OF M.R.STEFANIK AS A COPY OF THE ORIGINAL WORK FROM 1938

The construction of the monument started in 1937 to be unveiled at the 20th anniversary of Czechoslovakia.

A Czech sculptor Bohumil Kafka (1878-1942) was a professor at Prague Academy of Fine Arts. He met Štefánik in Paris in 1905 and knew his character, his interests in arts, science, politics, as well as his physiognomy. In 1928 Kafka made a statue of Štefánik as a pilot because he returned to his homeland – freed Czechoslovakia - in such uniform and as an active pilot and Frech army general. At that time the airforce uniform was a symbol of the technological progress in the army. Štefánik‘s right leg is moved forwards to indicate his determination and activity. The scroll in his left hand symbolizes good news he is bringing. Behind Štefánik there is a monumental pylon with a symbol of the Czechoslovak legions he founded. On the top of the pillar there is a sculpture of a lion, an ancient symbol of strength and dignity. The lion protects the national coat of arms, a symbol of national sovereignty. It is also a symbolic expression of the importance of legions for the foundation of Czechoslovakia.

The construction of the monument started in 1937 to be unveiled at the 20th anniversary of Czechoslovakia. The lion faced national borders, but after the Anschluss it was turned in 90° to watch the river Danube instead of the Third Reich. Despite many obstacles the monument was finished. However, some wanted to displace it or to replace the lion with a double cross or an eagle. The Government of fascist Slovak Republic displaced the lion in 1940. The Štefánik monument without the lion lasted until 1954. However, the communists were so irritated by Štefánik‘s opinions against the communism pronounced during the Russian revolution that hindered the great goals of the communist party. In March 1954 the communist government tried to tear down the sculpture but only the head was broken, therefore the monument was demolished by detonation. Sculptor Alexander Trizuljak claimed that the bronze eas used for two statues of Jan Amos Commenius created at that time by Vincent Makovský as state contract for Dutch Naarden and Moravian Uherské Hradište. In 1988 at the 70th Anniversary the renovated sculpture became part of the Memorial to Czechoslovak nation in front of the Slovak National Museum at the Vajansky riverside in Bratislava. The monument was eventualy renovated in 2009 in front of the new building of the Slovak National Theatre.

Štefánik is the most outstanding character of modern Slovak history. Each removal and restoration of his statues represent the attitude of the Czechoslovak and Slovak regimes to his role in history. As a homage to Štefánik, every year STEFANIK TRAIL is organized. There are 3 parallel trail races of ULTRA SINGLES / ULTRA RELAY TEAMS (2 members) / RELAY TEAMS (min. 4 – max. 7 members) along the ridge of Small Carpathians – on Štefánik Trail which starts on Bradlo near the cairn of General Štefánik and ends in Bratislava by the statue of general Štefánik. The course is 145km long. 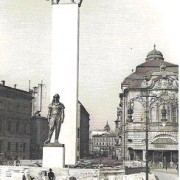 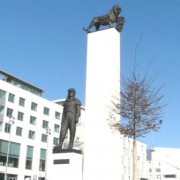