The memorial of a renowned rabbi and scholar Chatam Sofer or Rabbi Moshe Schreiber (1762–1839) and Bratislava Jewish community that was almost all exterminated during the World War II.

Easily visible and accessible outstanding memorial located near the Danube riverside, under the slope of the Bratislava castle hill and next to the tram line tunnel.

In the middle of the lawn with symbolic glass matzevot (gravestones) between the tram tunnel, by the tram and bus stops, 70m from the river Danube, there is a black cuboid stone entrance to the underground memorial.

The Chatam Sofer in Bratislava is a unique memorial reflecting the history of Bratislava Jewish Community. An ancient Jewish cemetery used to be in this place until 1943 when it was demolished due to the construction of the tram tunnel. Only 23 graves were preserved including the grave of Chatam Sofer, renowned rabbi and scholar who lived in Bratislava on the turn of the 18th and 19th C, served for 33 years in Bratislava and was one of the most respected authorities in Halakhah, the Jewish law. His yeshiva was the biggest since the Babylonian times. As a strong traditionalist  he refused the then widely spread ideas of the enlightenment as a threat for Jewish culture. Between 2000-2002 the whole place was refurbished, the tombstones restored, the tram line shifted. The architect Martin Kvasnica created a remarkable work which respect strict demands of Halacha (Jewish Law) and the highest standards of contemporary architecture.

The Jewish cemetery under the Bratislava castle was since 17th Century when the count Pálffy permitted it and was used until 1847 when the community started to use the Orthodox and later Neolog cemetery on the nearby Žižkova ulica. In 1943 the fascist Slovak state authorities decided on its demolition for the nearby tunnel construction started. Most of the graves were exhumed and reburied in the Orthodox cemetery, only 23 graves of Bratislava scholars around the Chatam Sofer tombstone were left in their original place and were covered by concrete ceiling. Even during the communist regime many Orthodox pilgrims and Jewish tourists would visit this place. The local people, however barely knew about the mysterious cemetery that survived the times when two synagogues and the Jewish street in Bratislava were demolished. In 1982 a tramline was built above the cemetery. Between 2000-2002, after the decades of neglect, the whole site was redeveloped and the gravestones were restored. The project was initiated by the New York-based International Committee for the Preservation of Gravesites of Gaonai Pressburg, an organization headed by Mr. Romi Cohn and in cooperation with the Bratislava Municipality and was coordinated by Dr. Peter Salner, the president of the Bratislava Jewish Community, which owns the site. The tram tracks were relocated by the municipality. Architect Martin Kvasnica designed a striking new complex that adheres to the strict requirements of the Halakhah (Jewish law) as well as to the highest standards of contemporary architecture. A major challenge was providing an access for the Kohanim (descendants of Temple priests), who are prohibited from visiting a cemetery by Jewish law. To resolve this, visitors access the site via a raised platform elevated above the cemetery grounds. After passing through an impressive black entry corridor structure, they enter the visitors’ hall, followed by a prayer hall for Kohanim, then descend into the main cemetery space with the graves of the Chatam Sofer and the other prominent rabbis. Glass plates symbolizing matzevot (gravestones) lost in the destruction of the cemetery are visible in the interior and also mark the memorial compound from the outside.

They remind us that the site is a Jewish cemetery, even though it disappeared in the 20th century, when so much of Jewish civilization was destroyed. The Chatam Sofer Memorial forms part of the Slovak Jewish Heritage Route. The memorial - a graveyard build above the cemetery of the rabbis and scholars who receive great respect in Jewish tradition is often visited by Jewish pilgrims from all over the world. The visitors shall wear appropriate clothing - long, covering arms and legs and a headwear. The visits to the memorial must be booked in advance at the Jewish community in Bratislava. 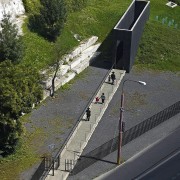 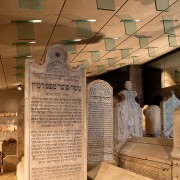