The memorial is dedicated to the victims of holocaust and the people who helped the Jews escape deportations to the concentration camps.

Next to the Technical University campus and Jewish cemetery in Zvolen.

The wall of Honour

The state of Israel awarded

“Righteous among the Nations”.

The park of generous souls reminds us of heroes

to the Jewish people during Holocaust

The memorial was created

on initiative and support of

Israeli House of Commerce in Slovakia

The dominant of the memorial is the Obelisk of Hope, a 5m high object composed of 620 elliptical glass plates which symbolize hope and life. Designed by the artist-glassmaker Palo Macho it transforms the tranquility of light, symbolizing hope and life. After dark, ground reflectors illuminate the monument. Next to the obelisk, there is the Threshold of Life by the artist Peter Kalmus, a two meter deep symbolic grave symbolizing the experience of death and rebirth. It cuts diagonally across the park and access road. The sarcophagus was made by Peter Kalmus from glass plates filled with river rocks tangled in brass wire symbolizing prayers for Slovak victims of holocaust. These plates are stuck in between two rails as a symbol of deportations to concentration camps. White stairs lead the way out of the tomb to the Tree of Life. On the wall behind the obelisk there is a sign with inscription and a long list of names and surnames follows. A multimedia digital information point has been installed at the entrance to the park.

On 9th September 2010 next to the Jewish cemetery in Zvolen this memorial Park of Generous Souls was unveiled dedicated to the memory of the Slovak people who saved Jewish lives from deportations to concentration camps. Its centrepiece is the Obelisk of Hope which was unveiled a year earlier and the Threshold of Life - a symbolic grave with an entrance on one side and an exit with white stairs on the other. This memorial is a unique honour to the individual people who acted spontaneously, motivated only by desire to help selflessly to the people in need. It is dedicated to the ones who succeeded but also to the people who failed in helping the Jews and died together with them. The construction of the memorial was initiated by the Israeli Chamber of Commerce in Slovakia. The chairman of the Jewish Community of Banská Bystrica and Zvolen, Jozef Klement says this memorial has no equivalent in entire Europe.

Before the solemn unveiling of the Park of Generous Souls the first of four tables was unveiled with the list of 730 names of the Jews deported from Zvolen to the concentration camps where they died.

The Park of Generous Souls in the central Slovak town of Zvolen was conceived as an oasis of peace honoring all Slovak citizens who helped save Jews during the Holocaust. The site of the memorial was selected deliberately. It stands next to Zvolen's Jewish cemetery where after the suppression of the Slovak National Uprising the mass executions of Jews, partisans, civilians and children were committed. The mass grave of 140 victims of Nazi crimes against humanity is located here. The cemetery has tombstones in Hebrew, German, Hungarian and Slovak and it is a memorial to the Jewish community in Zvolen. More than 550 Jews lived in Zvolen in 1940. Only a few Jewish residents live in Zvolen today, they are members of the Jewish community of Banská Bystrica. The building of Zvolen's former synagogue, at Jána Kozáčeka Street 10, serves as shop and office premises. 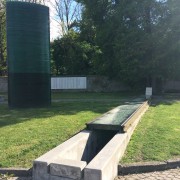 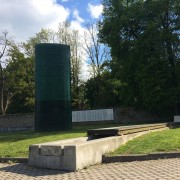 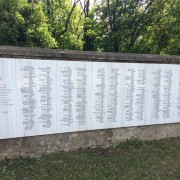