A simple concrete block serves as a symbolic tomb. Two names of the victims of brutal murder are carved on its top: investigative journalist Jan Kuciak and his fiance Martina Kusnirova. QR code provides access to the key information about the lives of  Jan and Martina and the information on then prime minister, minister of interior and president of police.

Temporary memorials for Jan and Martina arouse spontaneously short after their murder during the first days of demonstrations for the resignation of then prime minister and minister of interior. The first permanent memorial was unveiled in Košice on 21st August 2018 – six months after the tragic murder that caused shock and disbelief throughout the country, sparking mass popular protests and political crisis. On 22nd of February an investigative journalist Jan Kuciak (27) and his fiancee Martina Kusnirova were shot at home.

The memorial was designed by sculptor  Peter Kalmus known for his provocative work and social criticism. The unveiling of the monument was attended by the parents of Jan Kuciak, their family lawyer Daniel Lipsic (former minister of interior and former minister of justice) and mother of  Martina Kusnirova.

Jan was focused at the investigation of corruption, tax fraud, connection of the Slovak politicians, especially from the party SMER - social democracy, with the Italian mafia group 'Ndrangheta. He investigated fraud suspicion related to governing party SMER and its leader and prime minister Fico. Kuciak also investigated frauds at financial fraud with European union funds. His last article was about arrogant businessmen Marian Kocner who was later charged by the preparation of the murder. The brutal murder of Jan Kuciak and his fiancé committed on 21st February 2018 caused shock and sparked mass protests throughout the country -the largest since the Velvet revolution in November 1989 which ended communist regime. It also caused political crisis, the minister of interior resigned on 12th March 2018, the prime minister resigned on 15th March 2018, the president of police resigned three months after the murder. The crime is still under investigation which disloses a wide network and close connection between Slovak politics and mafia. In September 2018 four suspects were arrested. In March 2019  a businessman Marian Kocner who had threatened Kuciak shortly before his death was charged with the murder order. Jan Kuciak and Martina Kusnirova were to marry on 5th May 2018. Instead a concert was organized in a village Martina came from and large letters WE WON‘T FORGET displayed.

In front of the house where the couple lived there are still candles lit and wreaths and flowers laid. A sign on their gate says Love is stronger than evil.

Brutal murder of Jan Kuciak and Martina Kusnirova caused shock in Slovakia and sparked mass protests in Slovakia and among the Slovaks living all around the world. The initiative called For Slovakia was formed and connected many people in Slovakia longing for the change in politics. The public pressure led to the resignation of the prime minister, minister of interior and president of police and finaly to drop in political preferences of the ruling party SMER. 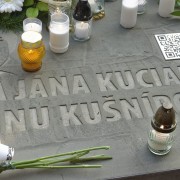 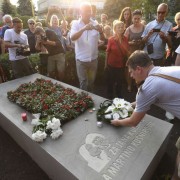 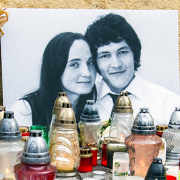 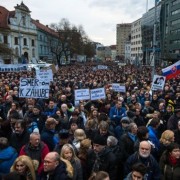