In Dubnica nad Váhom, on an improvised cemetery in the grounds of the ZVS Holding company.

Names of 18 identified Roma people murdered at the location.

A monument made of several blocks of stone with a sign Ma bisteren! (Don‘t forget!) and the names of 18 identified people murdered here durin the Roma holocaust.

The monument of Roma holocaust was made within a project Ma bisteren! (Don’t foret!) and unveiled in 2007 at the place of the tragedy. In 1944 in the middle of the forrest on the grounds of an armament factory 20 Roma men and 6 Roma women were murdered. 18 were shot, the rest was burried alive. The mass grave was exhumed after the end of World War II and the remains were burried in individual graves on the spot. The Roma people burried here came from the concentration camp in Dubnica nad Vahom. At first, the Roma men were interned there. In 1944 an internation camp for Roma families was founded here for the internation before the deportations to the extermination camps. By the end of 1944 700 people including 250 children were crammed in the barracks intended for 300 people.  In December 1944, however, the  epidemy of typhus broke out in the camp. The people  infected by typhus fever were to be transported to the hospital. Instead, they were driven to the grounds of the armament factory and brutally murdered. The monument was desined within the project of NGO In Minorita organization by author Ján Šicko.

In Minorita NGO has been workin with the Roma holocaust topic since 2005. In Minorita in cooperation with the Ministry of Culture of SR, Slovak National Museum and Ethnoloy Institute managed the project Ma bisteren! (Don’t forget!) and between 2005 - 2007 seven memorials and memorial plaques dedicated to the Roma holocaust in Slovakia were unveiled with pieous ceremonies. The project provided educational activities, pannel exhibition, seminar “Contested Roma holocaust“, collection of studies, prints, a TV documentary “Ma bisteren!” and several public discussions. Since 2005 a pietous ceremony is oranized annualy  in Banská Bystrica at the Roma Holocaust Memorial Day.

The estimated number of Roma people living in Czechoslovakia before World War II is at least 26000 by nomadic way of life. The legislation of the fascist Slovak Republic persecuted them and concentrated them in several labour camps all around the country. The situation went worse after the supression of the Slovak national uprising. Slovak Roma people were murdered in Dubnica, Kremnička, Poprad, Zvolen, Brezno and other places in Slovakia. They were not transported to Nazi extermination camps. Most (estimated number 21000) Roma people in general died in Auchwitz concentration camp, the largest group from 2nd to 3rd August 1944. Therefore the Roma Holocaust Memorial Day is held every year on August 2nd to commemorate the murders of hundreds of thousands of Romani by the Nazis and their allies during World War II. Nowadays, the Holocaust commemoration is very important especially for the rise of the neofascist movement in Slovakia and Europe. 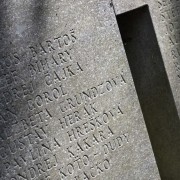 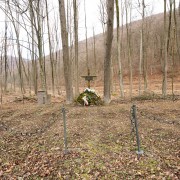 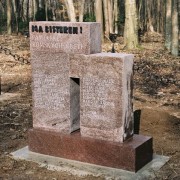 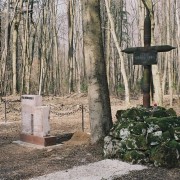 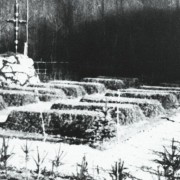 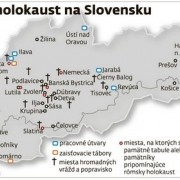