Memorial to the Victims of Communism (Bratislava)

In a square in a wider city centre of the Bratislava Old Town.

To the victims of communism.

Dimensions: 247 x 382 x 97 cm. Block of stone symbolizes hard labour political prisoners were forced to do in mines, especially uranium mines in Jáchymov. Reliefs of hands, cross, faces from profiles and a scripture To the victims of communism.

The memorial to the victims of communism was unveiled on 17th November 2005 – on the Day of fight for Freedom and Democracy. The idea of the memorial came from the NGO Hlbiny, Political Prisoners  Confederation, Anti-communism Resistance Association and Nation‘s Memory Institute. The stone memorial designed by academic sculptor Jozef Barinka commemorates 705 citizens sentenced to death, over 71000 political trials, almost 16000 people forced to leave their homes, over 13000 people in forced labour camps.

Commemoration ceremonies are oranized at this memorial annualy attended by the members of Confederation of Political Prisoners, municipality representatives, general public. At the 70th Anniversary of the February Coup when the communists came to power in Czechoslovakia, a commemoration with laying wraths and speeches took lace here.

The terror of the communism manifested in senseless persecutions, brutal repressions of any expression of disagreement with the official ideology in 1950s or 1960s. The opinions the life in socialism was easier and cheaper are unacceptable because of the violation of human and political rights in the communist regime. Apart from destroyed lives the communist regime commited immense crime on the public morals in Czechoslovakia. 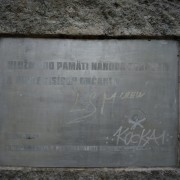 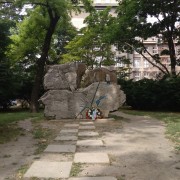 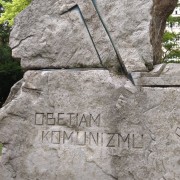 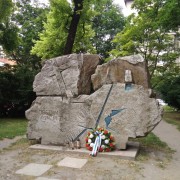 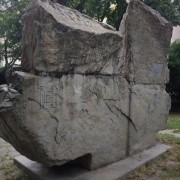