Monument to the victims of communism (Žilina)

The victims of communism – the victims of political trials, sentenced to death, forced labour or expelled from their homes.

In front of the Mestský úrad Žilina (Municipality) on a busy street.

TO THE VICTIMS OF COMMUNIST TOTALITARIAN REGIME

Tall, skinny figure in scars made by barbed wire standing in the middle of a metal gatelike construction – with symbols of a cross, arrows, bars. The plaque behind the fiure says: TO THE VICTIMS OF COMMUNIST REGIME. The sculpture was welded  from iron components.

The Memorial to the victims of communism was unveiled on September 15th 1998 in front of the Municipality of Zilina. The square bears the same name – Square of the victims of communism. The memorial reminds of 71 000 political trials, 705 people sentenced to death, 16000 people expelled from their homes and 13000 people escorted to force labour camps. The Municipality of Zilina was the first in Slovakia to name the square after the victims of communism. The author is a sculptor Milan Lukáč who studied in Bratislava and Paris. In 1990 he became the professor at the Slovak Technical University. He is a renowned author of monumental sculptures, painting and graphic, participated in international contests and symposiums. He won several international awards.

Every year a commemoration ceremony takes place here. The memorial honours the memory of the victims of communism, praises resistance to totalitarian power and bravery. The members of the Political prisoners confederation and other organizations commemorate all, who were prosecuted for their religion, lost their freedom, faught for democracy, but were escorted to forced labour camps, imprisoned, expelled from their monasteries, and their families.

Nearby in the Sad na Studničkách there is a memorial to the PTP – Auxiliary technical battalion – in fact, forced labour camps. Names of towns where the forced labout camps used to be are carved in the stone:"Mimoň, Svätá Dobrotivá, Libava, Lešť, Radvanice, Horní Suchá, Kladno, Most, Rumburk, Rajhrad, Děčín, Košice, Komárno, Karviná, Vansdorf, Podolínec, Dolné Životice, Bilina, Zdechovice, Orlová, Ostrava, Handlová". To the memory of the citizens who were classified to the military camps of forced labour on account of political untrustworthyness despite their will. FORGIVE BUT NOT FORGET! Slovak association Military camps of forced labour and auxiliary technical battalions“. 64000 people were interned in military camps of forced labour, mainly youn men from all over Czechoslovakia. The existence of these camps was part of organized political violence aimed against real, potential or fabricated opponents to the communist reime. The memorial is dedicated to the political prisoners was unveiled in 2010. 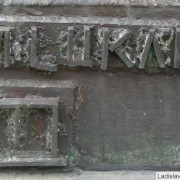 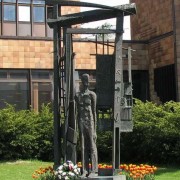