Monument to the fallen in World War I

Soldiers fallen in the World War I.

Murmanská height is an area above the town, near the Slavín monument on the street named after French partisans (Francúzskych partizánov).

The monument on Murmanská výšina is a simple cuboid tomb with 4 lions on each corner, inscription 1914 – 1918 and in the middle of each side a jut for wreath. It is surrounded by benches of the same material. This monument is renowned fo its elegant material and shapes, artistic quality and realization. The material used is granite from the demolished Fadrusz‘s monument of Maria Theresa that used to stand at Sturovo namestie until Czechoslovak legionaires demolished it in 1921.

The monument was unveiled in 1927. The authors of the memorial were architect Franz Wimmer and famous Bratislava sculptor Alois Rigele who has many works all around the town. The generation of sculptors born at the end of 19 C often depicted historic and social topics. Both Wimmer and Rigele were active members of Pressburger Kunstverein and Bratislavský okrášlovací spolok.

The observation tower was here until 1945. In 1930s commemoration ceremonies were organized here on All Saints Day attended by representants of municipality, associations, Czechoslovak statesmen (in 1932 Minister of Foreign Affairs Edvard Beneš, later President). In the past Murmanská výšina was popular destination with the observation tower built in 1877 by Bratislava locksmiths company Márton. The place used o have the most beautiful view of the town. The memorial lost its importance after the World War II when Slavín monument was built nearby. Nowadays the monument is neglected and the surrounding area blight. In the 1990s the monument was refurbished.

The association Devínska brána organizes here ceremonies to commemorate all the victims of senseless wars. Annualy and in cooperation with the Ministry of Defense and the guard of honour of the  Slovak Armed Forces, military music band, diplomats, Bratislava Old Town municipality, associations and ecumenic mass is served. 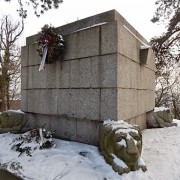 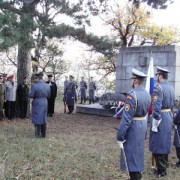 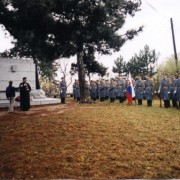