Sculpture of the fallen

The victims of the World War I.

In the park of Anton Bernolák by the fortification of Trnava.

The monument of the fallen is composed of two parts, a bronze statue and a stone base with marble board with the list of names of the fallen. The sculpture is depicted without uniform but it is clearly a soldier wound on head covered by bandage, holding a broken sword in his right hand.

In 1927 the town of Trnava organized a public collection for the monument for the fallen in World War I. The author is renowned sculptor Ján Koniarek who lived in Trnava, and already had created the monuments to the fallen. Out of the two designs the Dying warrior won. The Committee was founded for the collection of the monument construction was helped by the female associations and Trnava people organized several beneficiary actions as a futball match between the teams of steam mill and sugar factory employees, a „flower day“ and the Committee oranized a dance night with theatre performance, buffet and tombola. The monument was unveiled on 24th November 1929 by the festive ceremony in the town theatre, masses in the churches, festive march military, firemen, associations, general public and singing of national anthems.

In 2016 the statue was refurbished, annual ceremonies take place here to commemorate the fallen in wars on the Day of Commemoration of the Dead with wreaths laid and candles lit.

The memorial is an exception among the monuments to the fallen in the World War I due to its artistic quality and use of bronze material (all the other monuments were made of artificial stone according to the catalogue approved by authorities). As a result of lack of money, the statue was made too small to become a dominant memorial. In 1976 Gallery of Jan Koniarek was established in Trnava, which moved to Koppel‘s villa in 1994 and was extended in 2000s. 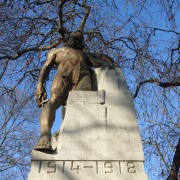