2 km above the village of Uhrovec, 533m above sea level, in the Strážovské vrcha mountain range is a white cairn with high pylon.

We will stay faithful to your message.

Peace shall be saved and anchored if the people takes it to his hands. (Stalin)

Slovak National Uprising is inexhaustible source of our class and  national pride. (Široký)

The memorial to the fallen of various nationalities fighting in Slovak National Uprising is a typical monument built in communist era. On the hill top where partisans were fighting, with a nearby  parking plot, mountain hotel Partisan and tourist hostel. The memorial is a cairn surrounded by mound with wide staircases, bushes. The walls are paved by stone. On the side there are symbolic graves of partisans and oranizers of SNP. A 15m high pylon in the middle of fivepointed star groundplan is finished by square plate. Under the pylon there is a mausoleum with soil of battlefields of WWII. The whole monument is made of stone and covered by ornaments. Outer walls bear inscriptions.

The construction was suggested by Communist Party of Slovakia and a district committee of Union of Slovak Partisans. The authors are aademic sculptor Jozef Pospíšil and architect Ing. Arch. Artur Szalatnai-Slatinský. The construcion started short after the liberation, lasted from 1948 to 1951 and was realized by hands for the lack of electricity and water on the hill at that time. The people from surroundin villages, former partisans, volunteers from Czech and Moravia helped here. The monument was unveiled at the SNP anniversary on 28th August 1951

There is a natural amphitheatre divided to several stages with benches. Three out of several bunkers nearby where partisans were hidden are refurbished and open to public. Seven or eight partisans were burnt in a bunker by nazis during the WWII which says a plaque above the entrance. Their bones were cremated and the ashes are burried in the monument. The whole area of 103ha is protected. Nearby there is a hotel, a hostel and an adrenaline park. 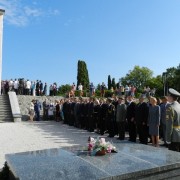 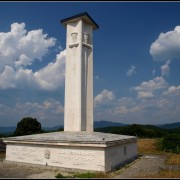 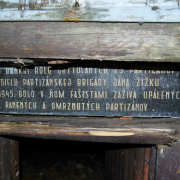