In 2016 refurbished synagogue from 1925, in the center of the town of Lučenec.

The work Memento is composed of four glass cuboid boxes filled with 70000 stones wrapped by brass wire. The number of boxes symbolizes the number of nazi extermination camps in Poland where Slovak Jews ended during  the Holocaust. Each stone symbolizes one murdered Jew from the fascist Slovak republic.

Author Ján Kalmus completed this work after 20 years. He says: 'Better 10000 more than one less. Each stone is different and original such as each person. The brass wire symbolizes the interconnectedness of lives. Each victim used to have a family, relatives, some of them are still alive'. The work was unveiled by President Andrej Kiska in 2016 on the Day of the Victims of Holocaust and of racial violence. The part of the opening was storin a „time capsule“ for future generations. Synagogue in Lučenec offered Kalmus the opportunity to place his work here.

One part of the stone collection is in the Park of Generous Souls in Zvolen as the Threshold of Life. Pater kalmus is also known for his provocative work such as painting red the bust of Communist politician Vasil Biľak who has never been sentenced for his responsibility for the legalization of the Invasion of the Warsaw Pact armies to Czechoslovakia in 1968. Kalmus wanted to show such people do not deserve to be honored.

Peter Kalmus is a well known and respected author who used to be active in underground movement in socialist Czechoslovakia. All his work provoke to think and focus to social criticism. Synagogue in Lučenec was refurbished in 2016 after dacades of neglect. Now it serves as a multicultural venue. The Holocaust in Slovakia has 70.000 victims. Peter Kalmus has Jewish-German origin, therefore he created the work Memento to express his emotions to Holocaust.he collected 70000 stones and covered them in brass wire in 20 years to commemorate and honor the victims of Holocaust. 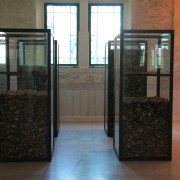 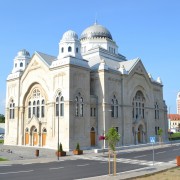