In the middle of central square at the end of the park.

Bronze sculpture on travertine base. Memorial to local native, awardee of high state honours for fight against fascism. Memorial is a cultural heritage and a dominant of the town center in Spišská Nová Ves.

Sculpture of Štefánik was destroyed and meltdown by the communists and replaced by Nálepka. Ján Nálepka was born in 1912 in Smižany. A small museum is in his birth house. He fought in world war II in Ukraine and died in Ovruc. He was awarded Hero of Soviet Union honours. The author ofthe memorial is Ján Koniarek (1878-1952). The work was unveiled in 1954. the ceremony was attended by highest political representants, Czechoslovak army, parents Michal and Mária and general Saburov from Soviet union. The memorial is dedicated to the victims of World War II.

Nálepka was recruited in 1939. In 1941 detached to eastern front. While he was Chief of Staff of a Slovak regiment stationed in the town of Yel’sk, Nálepka organized an underground anti-fascistgroup inside the army. His group would give the local population information about the situation on the front lines, sabotage railway tracks, and give false information to German military aviators, so that they would bomb uninhabited forest areas instead of towns and villages. The same year, Nálepka also established contacts with soviet partisans. And general Alexander Nikolajevič Saburov. He was persecuted for his antifascist activities and defected from the Slovak Army to soviet partisans to become the first commander of the 1st Czechoslovak partisan troop in USSR.  In 1948 a village in Eastern Slovakia was named Nálepkovo (Vondrišel before repatriation of original German population). In 1972 a movie was made about his story Zajtra bude neskoro (Tomorrow It Will Be Too Late) in a joint Soviet-Czechoslovak production with Milan Kňažko as Nálepka.

Memorial is dedicated to local native Ján Nálepka who is the only Slovak awared the honours hero of USSR and several Slovak military and state honours for his antifascist resistance in Wowl War II. His merits are timeless tehrefore he was awarded brigadier general by the President of SR in 2004. After the World War II he was misused for communist propaganda. His myth, legend, personality cult was created. Many statues made, streets, factories, schools and even one village (that has nothing to do with him) named after him. 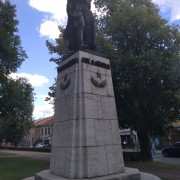 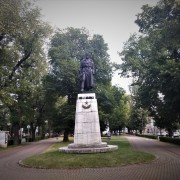