The escape of Vrba and Wetzler from Auchwitz in April 1944 and writing the report on the terror in Nazi extermination camp.

Borders between Slovakia and Poland Between the villages Skalité and Zwardoň

The Vrba-Wetzler Memorial is 658m above sea level by the state borders with Poland.

The memorial consists of two parts. Metal base has a tubus with 32 pages of Vrba Wetzler Report written by the two refugees Vrba and Wetzler after successful escape from extermination camp in 1944 in Žilina. There is also a shelf for placing the stones as a symbol of piety to the victims of holocaust. The concrete part bears inscription  'Oświęcim – Žilina, August 13. – 19. 2014' and 'VRBA–WETZLER memorial' on he other side.

Iron-concrete memorial was made and unveiled on August 19th 2014 near the border crossing during the Vrba Wetzler Memorial – the march of heroes  from Auchwitz to Žilina by renowned artist Fero Guldan on his own expenses.

On 7th July 2018 the participants of the Vrba Wetzler Memorial March were welcomed by the chairman of Zilinsky self-governing region who added to the memorial an iron bunch of flowers by the same author. A bench was added too.

Rudolf Vrba and Alfréd Wetzler escaped from Nazi concentration camp Auchwitz on April 7th 1944. after troublesome journey they managed to reach Žilina where they wrote a 32 pages report about industrial systematic extermination of people in Nazi extermination camp Auchwitz-Birkenau. The members of Žilina Jewish Committee were present. Nowadays their report is one of most important documents for the history of holocaust. Every year Vrba Wetzler Memorial takes place in summer – the march of heroes copying the track of escape. 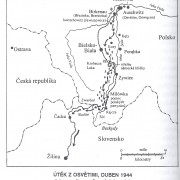 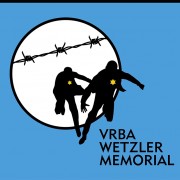 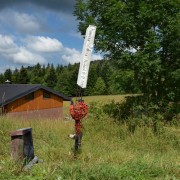 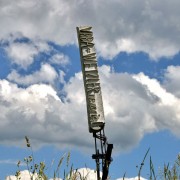