At the end of the Park of Andrej Bernolák, by the historic fortification of Trnava.

A lifesize sculpture of Milan Rastislav Štefánik (167cm) made of bronze weights 250 kg and stands on a granite base.

The sculpture of M.R.Štefánk was unveiled in Trnava in 1990 for the third time, this time at the square of SNP – its original spot. One of the three conservators Andrej Keppert says he is placed on the base that was prepared for Gotwald instead f its original one that was not available. The conservators led by academic sculptor J.Jurčo worked on its   restoration and return to the square. The statue was unveiled at the 71st anniversary of general’s traic death. The new spot was chosen in the reconstruction of the park bz the evnagelic church.

The statue of Stefanik was proposed by Matica Slovenská already in 1923, 4 years after his death. The local branch of MS oranized public collection. The work was created by Trnava sculptor Ján Koniarek and it was first unveiled on October 19th 1924 by Štefánik‘s mother Apolonia and Jan Masaryk at the Square of SNP. 25 years later the memorial vaneshed and was later replaced by the Memorial to the liberators. In 1950s Štefánik was deleted from Slovak history as an uncomfortable person, deleted from history lesons, books, the Štefánik streets renamed, statues removed. In 1968 Štefánik‘s statue was unveiled opposite the monument of Anton Bernolák, but lasted only several months to end up in the deposit of Jan Koniarek gallery. The conservator Keppert suggested to install Štefánik‘s statue already in 1988 but it was not approved for the fear of the Comunist party.

Commemorative events related to Štefánik and the end of wars take place at the statue. The representants of  local authorities lay wreaths and flowers here. The migration of Štefánik statue (as well as many others) copies ambivalent attitude towards this importand and outstanding personality througout 20th Century in Czechoslovakia. 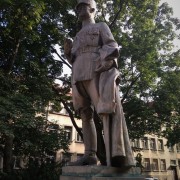 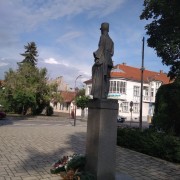 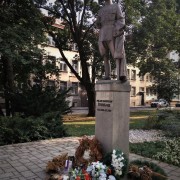