As a farmer I am proud to till the soil, listening to its vivid speech, making a loaf of bread for you, wherever around the country I come, I always eat bread with you.

The monument is composed of three figures – two female and one male on a base. The womam in the center holds a harvest wreath, the two in the back hold a band. The base has a sign. The stairs are on the right side.

The memorial was suggested by the District Agricultural Administration in Trnava and was unveiled in 1989 at the 40th anniversary of the collectivisation and short before the Velvet Revolution. The author is a sculptor Ladislav Snopek - known for his monument to French partisans and many others.

Soon after the Velvet revolution the removal of the monument was discussed, but eventualy it did remain on its original place. In 2008 an unknown person improved the statues by painting them in vivid colours, the harvest wreath looked like an amanita and the figures were all dressed in colour. Despite the public enjoyed the new look, the municipality decided to return to the original version and got the sculptures cleaned.

Nowadays most people are not aware or perceive the original meaning of the memorial which is located at a busy entrance to the city center (Bernolak ate) and in a beautiful park of Anton Bernolák. The ideologic inscription is not visible and overgrown by greenery. The collectivisation started in Czechoslovakia in 1949, a year after the Communist Coup d'état. A large group of inhabitants was affected by the forced collectivisation in the 1950s. Peasants and farmers had to give up their land, machinery and cattle for the benefit of established Joint agricultural cooperatives (JAC). The functionaries of the Communist Party of Czechoslovakia, who were the main agitators and commission members of the National Committees, first promised people various benefits if they joined the cooperative, but if they refused, they were threatened: '… your children shall be excluded from high schools or universities”, and became victims of various crimes including physical attacks (torturing, beating, investigation of hunger and thirst, drowning in wells…'). 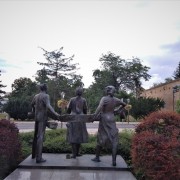 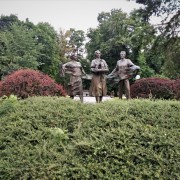 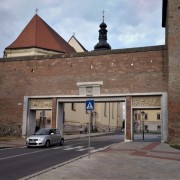