In the middle of a busy Hviezdoslavovo square in the Slovak capital, facing the building of the Slovak National Theatre.

A heroic bronze figure with a goose-quill in right hand and a book on the knee bent forward, sitting on a massive base made of black granite.

When Czechoslovakia was established in 1918, many statues and monuments were replaced. In the center of a new capital was a statue to a great Hungarian writer : Petőfi. The new republic considered him inapropriate, therefore  Petőfi‘s statue was covered by wooden box and later demolished and stored in the stables of Grassalkovich palace. In 1950’s it was moved to the Alley of Janko Kráľ at the Petržalka, on the right side of river Danube. It was renovated in 2003 and placed in the Medical Garden in the Old Town. On 26th September 1937 a statue of a great Slovak poet was unveiled in front of the theatre. The only Slovak Prime Minister of interwar Czechoslovakia Milan Hodža unveiled the statue. Contemporary press reported 15000 people present at the unveiling ceremony. The theatre presented a Hviezdoslav’s drama Herodes and Herodias. The heroic statue was created by Vojtech Ihriský and Jozef Pospíšil in cooperation with architect Július Lehocký. American Slovak Ligue collected and donated money for the statue. The original concept was different, the statue was to be made of white marble with arcade crescent and architrave with Hviezdoslav’s verses. Instead, cedar trees were planted, the statue cast from bronze and moved further to the middle of the square.

In 1950s a concrete cistern was built in front of the statue. Later on small posts with Hviezdoslav‘s verses were added on the sides.

P.O.Hviezdoslav is considered on of the greatest Slovak writers. He created in Slovak language in the last decades of Austria-Hungary in the times of severe magyarization. He welcomed the establishment of Czechoslovakia and was elected a member of Revolutionary National Assembly and restored Matica slovenska.

Hviezdoslav square before the statue of Hvieydoslav was unveiled: Bratislava on old postcards: 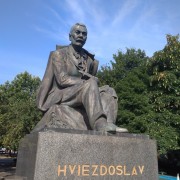 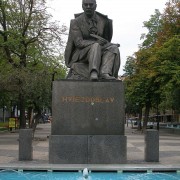 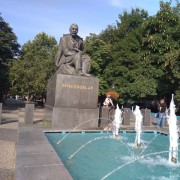 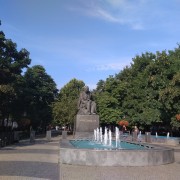 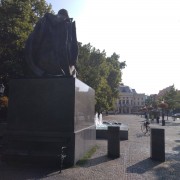