In Anton Bernolák Alley by the historic gate – the entrance to the town.

Slovaks, write in Slovak! Here you have my word about your language

The monument by Bernolák’s gate consists of two parts. A sitting male figure (Bernolák) with a book leans forward and talks to a group of men, women and kids, who represent Slovak nation – rural and urban people – listening to Bernolák. The sandstone base bears an inscription. Opposite this monument is the memorial to collectivisation from 1989.

The monument was unveiled by the only Slovak Prime Minister in interwar Czechoslovakia, Milan Hodža, in 1937. The author is a renowned Trnava sculptor Ján Koniarek.

The monument underwent a complete renovation in 2007, in 2016 was redesigned its surrounding. In 2013 the letters of inscription were stolen, probably to be sold in scrapyard. The municipality had the monument renovated and the letters were made of epoxide.

The sculpture is a national cultural monument mentioned in most tourist guides. The work commemorates Bernolák‘s civilisation merits. In the enlightenment Slovak scholars started to use Slovak language instead of Latin or German. They formed a literary language from folk dialects and used it in the first literary works. Anton Bernolák is not a political personality, but has nationwide and international influence by the first codification of the Slovak language. He also completed remarkable and exstensive linguistic work : six languages vocabulary  Slowár slowenskí, česko-latinsko-ňemecko-uherskí (1825 – 1827), where he proves Slovak equal to other languages. 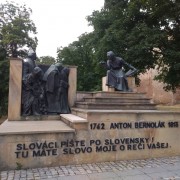 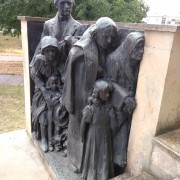 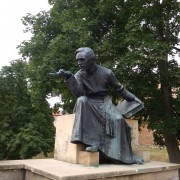 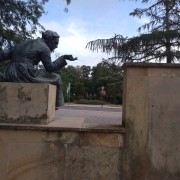