In the wider city center of Ružomberok, in the park at the Námestie slobody (Square of Liberty).

Two sandstone sculptures Serfdom and Resistance on the base with solitary sculpture of Victory on the highest pillar. The Serfdom is depicted by the doublecross and a sitting female figure and kneeling male figure, both  exhausted and anxious, with bent heads and limp bodies. The Resistance is composed of the two figures in Italian and Russian uniform capturing the country represented by a man with a branch behind them. The victory on the highest pylon symbolizes a young woman wrapped in drapery with her head turned up. The sculpture follows contemporary trend of glorification of national history.

The memorial as unveiled on 28th October 1928 at the 10th anniversary of the end of World War I and declaration of Czechoslovakia. It was a commission of the town of Ruzomberok and the author of the sculptures is a well known sculptor, medal maker and pedagogue. The memorial is on the place of the last victims of the World War One in Ruzomberok, the members of newly established National Guard (Jakub Joudal and Viktor Bystričan) on 1st December 1918 na dnešnom Námestí Slobody (former Nemecká ulica/German Street). The original name of the monument was Liberty of Slovak nation and it was unveiled by Andrej Hlinka.

The sculptures were removed after the Žilina agreement and Manifest of Slovak nation in autumn 1938 that declared Slovak autonomy within Czechoslovakia. It was returned on April 5th 1945 at the first anniversary of liberation of Ruzomberok by the Red Army. The monument is an example of contemporary trend of glorification of national history, very schematic and realistic in artic expression.

The citizens of Ruzomberok meet by the monument at anniversaries of the end of war or Velvet Revolution. 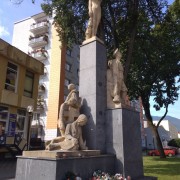 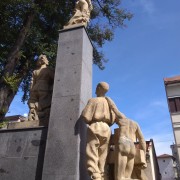 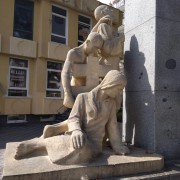 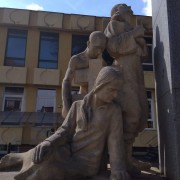