Memorial of Public Against Violence (VPN)

The people of revolution in November 1989 when the communist regime in Czechoslovakia ended after four decades.

The plaque is placed on the facade of a hospital historic building on the square where revolutionary events and mass demonstrations took place in November 1989.

Only who fought for freedom, deserves it. At this place we decided to take the responsibility for the future to our own hands. We decided to end communism and establish freedom and democracy.

The plaque was unveiled on the 17th anniversary of the November 1989 – the mass demonstrations for the change of communist dictatorship into pluralist democracy. The memorial was suggested by the main actors of the revolution and members of Public Against Violence. It was placed on the square where the demonstrations took place and most of the crucial speechces were given. The author is unknown.

In February 2018 short after the brutal murder of a young investigation journalist Ján Kuciak and his fianceé the crowds of people filled the square again. The crowds were even larger than in 1989 and called for the resignation of the Prime Minister, Minister of Interior and the Police President which happened short after. Since then, underneath the plaque has been the picture of Ján and Martina and the people bring flowers and lit candles to honour them. Next is a picture sprayed on the wall – three names, Ján Hus, Ján Palach,  Ján Kuciak. The first one was burnt at the stake for the effort to reform the Catholic Church, the second burnt himself in the protest against the occupation of Czechoslovakia by the Warsaw Pact armies in 1968.

The values of November – the freedom and life in truth need to b defended all the time. In three decades since November 1989 the Slovak society has changed but still faces corruption, manipulation of the public and the threat of extreme political movements. Typically, there is no monument built or a public place named after November 1989 in the capital where all the key events of the revolution took place. Only four commemorative plaques are in different spots related to the revolution. 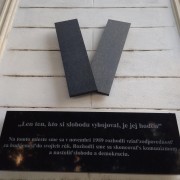 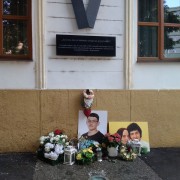 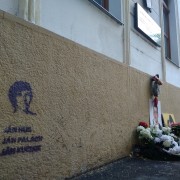 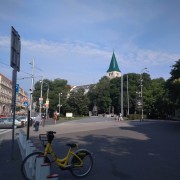 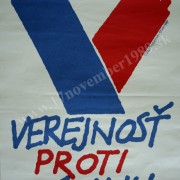