Partisans in Slovak national uprising in 1944, the main antifascist action in Slovakia during the World War II.

In the upper section of a busy square in the capital.

Remember the year of forty-four, when the determined to die rose against the fascist death, the loyal sons protected mothers with a naked chest, the red sky was emblazed by Stalingrad.

Originally the Market Square with daily, weekly and annual markets, was renamed several times with the changes of the regime. It was the Square of the Republic during the first Czechoslovak republic, then Hlinka’s Square during the fascist Slovak Republic, after the communist coup d’état it became Stalin’s Square. It has been the Square of Slovak national Uprising dince 1962. Between 1949 and 1962 a statue of Stalin by Pavol Bán was placed here as a gift to generalissimus for his 70s birthday. Stalin was replaced only nine years after his death, in 1962. In 1974, during strong normalization, the sculpture of a partisan and two women was unveiled at the 30s anniversary of the Slovak National Uprising. The author of statues is Ján Kulich, the main sculptor of Normalization in Arts and the principal of the Academy of Arts for 16 years during the Normalization.the architect was Dušan Kuzma.

This square was used for decades for majestic celebrations of the Labout Day or pioneer vows. Workers, farmers, pioneers and proud builders of communism would march by the grandstand in front of the Manderlak house. Stalin’s statue was stored in deposit of the Slovak National Gallery after 1962. In 2012 the national gallery placed this statue in front of the main entrance as a teaser for the exhibition Interrupted song about Socialist Realism in Art. In an instant someone painted it red.

The Square of Slovak National Uprising is the main place for public gatherings and demonstrations. The revolutionary demonstrations took place here in November 1989. In 2018 even more people protested here after the brutal murder of a young investigative journalist Ján Kuciak and Martina Kušnírová. The crowds called for the Prime Minister, Minister of Interior and Police President responsible fr the disruption in the politics and the country to resign and they did.

The mass demonstrations after the murder of an investigative journalist Ján Kuciak and his fiancé: www.youtube.com/watch?v=010vdyCFkBg 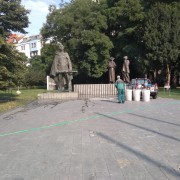 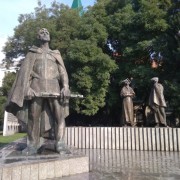 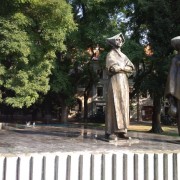 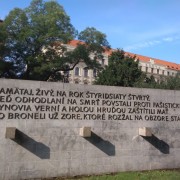