Memorial to the victims of the World War II

Victims of the World War II.

By the hill of  Javorina, 1134 above the sea level on tourist tracks for hiking, cycling, crosscountry skiing.

On this place on 23rd October 1944 a Soviet military aircraft carrier Li-2 čís. 30  flying from Tri duby to Ľvov with seven crew members, eight wound soldiers and one nurse was shot down by German air fighter. Only the crew members and one wound Czechoslovak soldier survived the tragedy. Eternal fame!

A simple monument consists of cuboid sepulchre and obelisk with a five-pointed star on the top. Aircraft propeller from crashed airplane is here too. A tourist shelter is near the monument that offers beautiful views of Levočské hills, Low and High Tatras.

The monument is built on the place of aiplane crash – on October 23rd 1944 a Nazi air fighter shot down a Soviet  aircraft carrier Li 2 which started from the airport Tri duby and headed to Ukrainian Lviv with seven crew members, eight wound Czechoslovak and French soldiers and one nurse. Out of sixteen people only five survived, four Soviet crew members and  one Czechoslovak soldier.

The place is paopular among tourists and sportsmen – as it is located at tourist and sport tracks for cycling and crosscountry skiing. In the meantime someone stole parts of original engine from the aircraft found on the place of tragedy.

The memorial with an airplane screw Li-2 has been a popular tourist spot among local people ever since it was built in 1965. A new tourist shelter makes many people stop and enjoy the beauty of the view of the mountains. This relatively small monument in rather unexpected environment reminds us of countless tragedies that every war means. 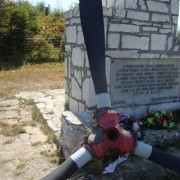 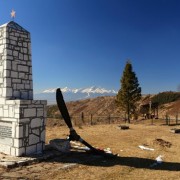 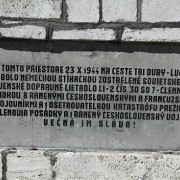 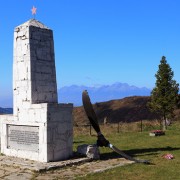