Soviet soldiers, the victims of liberation of Bratislava at the end of World War II.

On the top of the hill above the capital in the middle of military cemetery, Slavín is a dominant monument in Bratislava.

Along the walls on the solemn hall in the marble stone there are carved the names of several Slovak towns with the dates when they were liberated by the Soviet Red Army and this epitaph:

The concept of the monument was made with the respect to already existing graves of the soldiers fallen in the battle for the liberation of Bratislava. The monumental staircase creates dignified entrance to the monument. To the right side there is an information panel with texts in five languages. In the middle of the cemetery there is a solemn hall covered by marble and surrounded by arcades with 39.5m high granite obelisk with a 7m high statue of a Soviet soldier flying a flag created by sculptor Alexander Trizuljak. The entrance casette door with bronze relief collection by R. Pribiš depicts scenes of suffering in the World War II. Along the walls on the solemn hall in the marble stone there are carved the names of several Slovak towns with the dates when they were liberated by Soviet Red Army and the epitaph. The monument is surrounded by large, stone paved surface and two mass graves of 6845 soldiers and 278 individual graves.

There was a discussion about a monument dedicated to the soldiers fallen for the liberation of Bratislava right after the end of the World War II. The military cemetery had been already established. The monument was supposed to compete with the castle in its dominance and should be visible from the main roads leading to the town. The construction became very soon the expression of political submission of Czechoslovakia to the USSR. Many leading Slovak artists took place at the architectural contest announced in 1953. The architects and sculptors created their proposals in accordance with the only acceptable style after the Communist coup of 1948 - socialist realism even though they used to design in modernist style before. Architect Ján Svetlík won the tender with his vertical design and an enormous statue of a soldier flying a flag and crashing swastika by his boot, placed on the top of almost 40m high pylon. The construction of the monument lasted from 1957 until 1960 and was unveiled at the 15th anniversary of the liberation of Bratislava by the Soviet army which. The unveiling ceremony was a major event with the Czechoslovak president, numerous top Communist party members and public. The term Slavín comes from the period of national revival in 19th Century and is a mythological place where all Slavic heroes would go after death.

In 1962 Slavín was announced National Cultural Heritage. All the sectors of six mass graves terrain suffer certain deformations due to the erosion of soil in grave. The statics could have endangered safety of the obelisk that’s why the underground of the monument was reconstructed at the end of second millennium. Cave-in is not dangerous, it is rather aesthetic matter.

Slavin is definitely one of the dominants of Bratislava scenery.Every year on 4th April, the day of liberation of Bratislava, official ceremony paying homage to fallen Soviet soldiers takes place here with the President of Slovak Republic, political representants and public. The solemn hall is opened during the ceremony. In spite of certain attempts to demolish the monument after 1989 for its relation to the USSR, it still remains popular place of recreation and tourist guides for its location and beautiful views of the city and its surroundings. 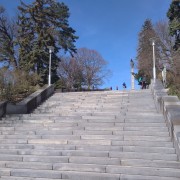 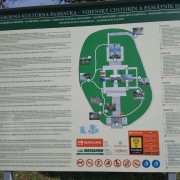 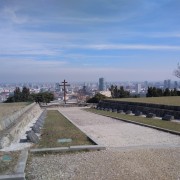 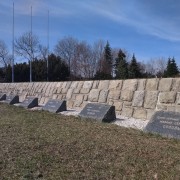 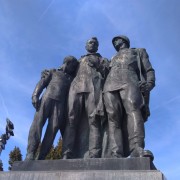 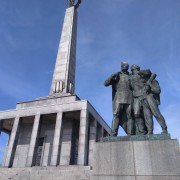 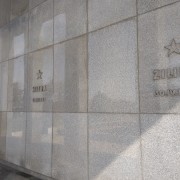 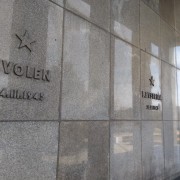 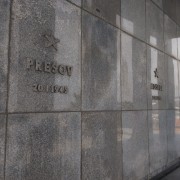 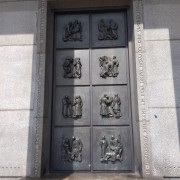