The victims of the Slovak National Uprising, which broke out on August 29th 1944 and was the most important anti-fascist action of the Slovaks during the World War II.

The sculpture is an integral part of the Slovak National Uprising Memorial in Banska Bystrica, being set in the middle of the building, at the entrance to the museum.

This bronze sculpture depicts the suffering of the victims of war. It is composed as the mass of deformed human bodies, which is terrifying in its monumental measure and warns against the tragedy of war. It is a timeless work of art with important social meaning..

The sculpture unveiled in 1969 together with the Slovak National Uprising Memorial at the 25th Anniversary of the Uprising. The sculpture 'Victims warning' is one of the dominant parts of the SNP Memorial in Banska Bystrica. The scuplptor Jozef Jankovič, however, during the times of the 'Normalization' did not agree with the politics of the Communist Party of Czechoslovakia and thus his works were banished. The Party decided to remove the Victims warning sculpture which was officially explained by the depressive impact on the visitors of the museum. The sculpture was removed to the trash yard near Banska Bystrica in 1972. The preservationists had to struggle for the temporary transfer of the sculpture to the area of the Monument of Kalište – this village near Banska Bystrica was burnt and destroyed by the Nazis. This temporary solution  lasted for 30 years. The transfer was difficult due to the measures and weight of the monument so it had to be divided into several parts and reassembled on the new spot.

In 1972, the sculpture of the Victims warning was transfered to a trash yard and later to more dignified place near the memorial in Kalište. The work was placed back to its original place only in 2004. This time it was disassembled easily due to the procedure used decades ago.   Also, the  two legs were added that were demolished by vandals at the end of 2001.

The sculpture is interesting especially because of its outstanding connection to the architecture. When the architect Dušan Kuzma designed his best work – the Slovak National Uprising Memorial - he also incorporated the sculpture of Jozef Jankovič. Jankovič focused on the expression of the suffering of war victims. The composition of the mass of deformed bodies is terrifying and warns against the tragedy which is always result of war. It is a timeless work with an important spocial impact. Jankovič created it when he was less than 30 which also means he was an outstanding talent and already had firm views. At the ceremony for the 60th anniversary of the Uprising, the sculpture  was already placed on its original spot. Every day at the end of August there are celebrations of the Uprising which was the most important antifascist action of the Slovaks during the World War II. The celebrations are attended by the highest Slovak officials with rich programme of military exhibitions, film shows, exhibitions, concerts. The Slovak president awards the highest state honours to the antifascist fighters at this occassion. The event was also attended by Speaker of Parliament, Prime Minister, several other members of the cabinet and representatives of more embassies among others. 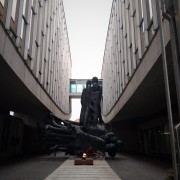 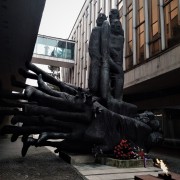