Monument to the Kings of Šumava

The monument is situated in the place where the well-known smuggling trail 'Channel 54' led to neighboring Bavaria, which was used by the 'King of the Bohemian Forest' Franz Kilian Nowotny.

This path was used by the free-minded citizens which left their country after February 1948. Dedicated to the Czechs and Germans, who with the dedication of life transferred. The insription is also in German language (Gestiltet von) Circle of Friends of Czech-German Understanding JUDr. František Talián Tourist Center Radost Kvilda.

The monument was unveiled on 19 June 2004. The initiators of the monument are the Radost Tourist Center in Kvilda and the Circle of Friends of Czech-German Understanding. The memorial is dedicated to all who helped the refugees to leave their homeland whcih was enslaved by the communist regime.

The memorial is located on the smuggling path that was used by many refugees after the Communist coup in February 1948. At this point, the smuggling path passed a high rock from which silhouettes could be seen. This path was also used by Franz Nowotný called Kilian. He alone made about 2000 crossings to and from Bavaria. The last one in May 1950 became almost fatal, as the State Security prepared for him a trap. Although he was injured he managed to return to Bavaria.

After the Communist coup in February 1948, thousands of people threatened by Communist power left their homeland, sometimes only for their class origins. Due to the fact that the Communists immediately banned travel to the free world and invalidated their passports, modern exiles left the Communist dictatorship illegally using smugglers, often in very dramatic circumstances. One of the ways to escape was just crossing the border in the Bohemian Forest, which was forested and thus made it difficult to guard the border. The monument is listed in tourist guides and on websites dedicated to tourism in Šumanva National Park. 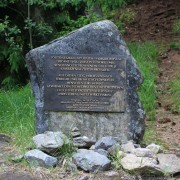 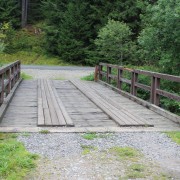 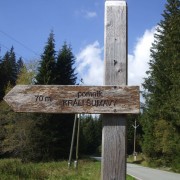