The victims of the Iron Curtain

It is the former part of the wired barricade - fence approximately 3km from the state border. Originally, in the mid-sixties, a barbed wire barricade was electrified. It was built in the first half of the 1950s on the basis of Act No. 69/1951 Coll. About the prtection of the state borders. The last version of the Iron Curtain in Czechoslovakia on the western borders dates back to the 1970s. It consisted of a wire barrier, a low-voltage signal wall, plowed on both sies of the fence treated with herbicides and a service asphalt road.

On the basis of an agreement between the then Administration of the Podyjí Protected Landscape Area with the Ministry of the Interior and the then Border Guard Brigade in Znojmo, part of the Iron Curtain was not destroyed and left as a memorial. Originally there was also a second line of barbed wire fence - it is indicated at the beginning. It was created in 2015 by the Administration of the Podyjí National Park from the original material.

The monument is a popular tourist destination. It is often used in historical documents because it is the only place where the original iron curtain is preserved in the Czech Republic. For example, there was a jingle for the documentary series Tales of the Iron Curtain. 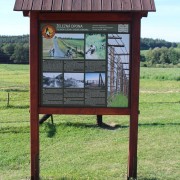 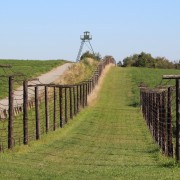 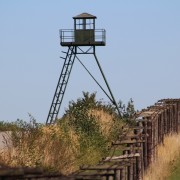