The monument is located in the symbolic cemetery in Ďáblice.

A block of marble that is perched on a plinth. Dimensions 300 x 110 cm. On the nramor plate is the inscription Victims of Communism and hands of bronze captured in barbed wire.

The memorial was unveiled in 1992 in the presence of Václav Havel, President of Czechoslovakia. The project initiators were the Confederation of Political Prisoners and the Union of Former Political Prisoners. The author of the monument is sculptor Antonín Kulda designed by prof. Karger from USA.

The memorial hosts regular commemoration of the victims of political trials. Part of the monument is also 247 tombstones with the names of executed or otherwise perished political prisoners. The tombstones are arranged in 45 rows.

The honorary burial site in Ďáblice contains several thousand remains after the executions in the so-called shaft graves. It was used already during the war and was stored in it the remains of resistance fighters executed for anti-Nazi resistance, as well as after the war there were imposed executions of retribution processes. Subsequently, the shafts were used to locate the bodies of victims of political trials in the 1950s or people died during interrogations such as Father Josef Toufar, whose bodily remains were already exhumed 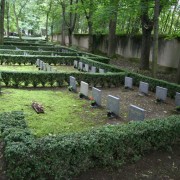 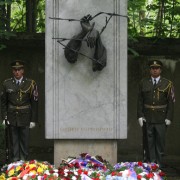 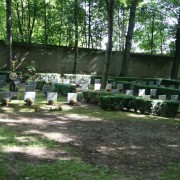