The monument is located near the state border with Austria, where hundreds of refugees tried to get into the free world. Some have paid for their efforts with their lives and the memorial is dedicated to them.

The memorial is made up of fifty-three steel stellas, each seven meters high, containing the name and the year when the victim was killed at the border.

The Memorial is dedicated to the victims of the Iron Curtain in South Moravia. Authors: Ing. Tomáš Pilař and Ladislav Kuba. The memorial was initiated by the civic association Memory. The memorial was unveiled on November 20, 2014 on the occasion of the twenty-fifth anniversary of the November revolution in 1989. The ceremonial unveiling was attended by the chairman of the civic association Memory Miroslav Kasáček, deputy governor of the South Moravian region Roman Celý, Mayor of Mikulov Rostislav Koštial and chairwoman of the Confederation of Political Prisoners of Czech Republic Naděžda Kavalírová.

The monument is located on the Iron Curtain Trail (EuroVelo 13, Path of Freedom), which runs along the border with Austria in the former Iron Curtain. One of the biggest crimes of the Communist regime was the tying of borders and preventing its own citizens from leaving the country. Hundreds of people died from electric shock, which was installed in the Iron Curtain until the mid-sixties, ripped by dogs, shot to dead, drowning while trying to cross border flows, or died of explosions of mines or other booby traps. It is these victims that the memorial commemorates.

The monument draws attention to the time of communist totalitarianism and commemorates the victims who tried to cross the Iron Curtain. There are regular gatherings and commemorative acts at the monument and are frequently mentioned in tourist guides and regional press in the Czech Republic as well as in Austria. The Communist totalitarian conference was launched several times at this memorial. In 2015, the memorial won the National Prize for Architecture Grand Prix 2015 and honorable mention in the category of architectural design. 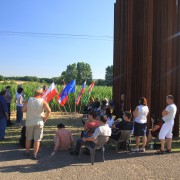 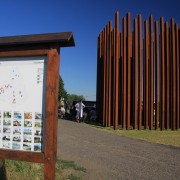 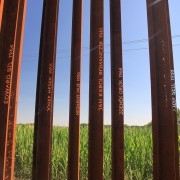