The monument commemorates shipyard workers who died during the protests in December 1970. In a broader sense, it is a symbol of opposition to totalitarian restrictions and the fight for democratization of the country.

Gdańsk, Solidarity Square, near Gate No. 2 of the Gdańsk Shipyard, near the place where the first workers were killed.

Fragment of a poem by Czesław Miłosz: 'YOU WHO HURT A SIMPLE MAN, LAUGHING OVER HIS HARM BY EXPLODING, DO NOT BE SAFE, THE POET REMEMBERS. YOU CAN KILL HIM, A NEW ONE WILL BE BORN. DEEDS AND CONVERSATIONS WILL BE WRITTEN DOWN'.

Verse 11 of Psalm 29, 'The Lord gives strength to his people the Lord blesses his people with peace'

Boards with the names of those killed in 1970

The monument consists of three crosses 42 metres high, each weighing 36 tonnes. An anchor is hung on each one, weighing about 2 tons. The crosses are made of chromium-nickel steel plates, acid-resistant steel, the anchors are made of brass plates and the reliefs are made of bronze. The crosses are arranged on a triangular plan, with irregular, cracked shapes. They commemorate the first three shipyard workers killed. The lower parts of the monument are decorated with stainless steel reliefs depicting the lives of the shipyard workers (authors: Robert Pepliński and Elżbieta Szczodrowska-Peplińska). On the bas-reliefs of the dates 1956, 1970, 1980 and 1981, on one fragment of Czeslaw Milosz's poem entitled 'You who wronged'. The monument also bears a quotation from Psalm 29.

The construction of the monument was made possible by signing the August agreements (31 August 1980). On September 1, 1980 the Social Committee for the Construction of the Monument was established, headed by Henryk Lenarciak; on September 17, 1980 the location was accepted, and in October 1980 a project by sculptors: Bogdan Pietruszka, Elżbieta Szczodrowska-Peplińska and Robert Pepliński, supported by the architect Wiesław Szyślak, was selected. Small architecture surrounded by the monument was designed by Wojciech Mokwiński and Jacek Krenz. On 16 October 1980, the Social Committee for the Construction of the Monument asked Czesław Miłosz to write a poetic work, which in the form of an enlarged manuscript would be a permanent element of the monument's composition. The poet proposed to refer to verse 11 from Psalm 29 in his translation. The monument was built from social donations. The necessary steel sheets were provided by the Batory Steelworks in Chorzów. The shipyard workers were involved in the processing of the monument's elements free of charge and after working hours. The ceremonial unveiling took place on 16 December 1980, on the 10th anniversary of the massacre. 'Solidrity' delegations from all over Poland took part in it. Representatives of the authorities also arrived - Henryk Jabłoński, Chairman of the Council of State and Party - I Secretary of PZPR in Gdańsk Tadeusz Fiszbach. The Polish Episcopate was represented by Bishop Bronislaw Dabrowski and the Solidarity Trade Union Lech Walesa. During the ceremony, a 'Lacrimosa' based on Krzysztof Penderecki's composition was premiered. The monument was unveiled by representatives of the families of the killed shipyard workers: Jan Łopata, Ewa Ostrowska, Janina Tarczewska, Lech Widerlik and Tadeusz Nastały, who cut the white and red sash. Lech Wałęsa lit a candle on the plinth and gave a speech.

After 13 December 1981, the monument was an important memorial for the underground 'Solidarity'. In front of the monument the memory of the fallen shipyard workers was honored by Pope John Paul II, US Presidents Ronald Reagan and George Bush senior, German Chancellor Gerhard Schröder, German President Richard von Weizsäcker, British Prime Minister Margaret Thatcher and many others. In 1999-2000 the monument received an illumination.

The Monument to the Fallen Shipyard Workers 1970 is one of the most important monuments erected in Poland after 1945. It is a place of meetings and tributes to the presidents, monarchs and heads of government visiting Gdańsk. Present in city guides, situated wn city centre near Gdansk Shipyard and (recently) the headquarters of the European Solidarity Centre, it is a must for most city tours. On the anniversary of events connected with the history of December 1970 and the 'Solidarity' movement, important national or local celebrations are held here. 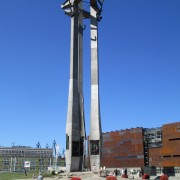 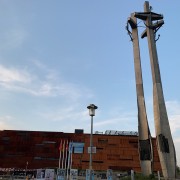 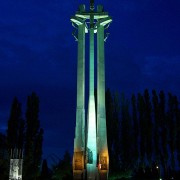