Monument to the Sacred Heart of Jesus / Monument of Gratitude

Poznań, currently Mickiewicz Square, within the area of the Poznań Monument of June 1956, on the site of the Bismarck Monument destroyed in 1919.

The monument had the form of a triumphant arch, 12.5 m high and 22 m wide. The mass was erected from the Krakow dolomite. On the front side, in the central recess, there was a 5.3 m high bronze cast figure of Christ by Marcin Rożek, set on a two-metre high base. Marcin Rożek also made two medallions over the side spans. The medallion on the left side depicted Pope Pius XI, and on the right side depicted Polish Primate Edmund Dalbor. The northern side was decorated with bas-reliefs by Kazimiera Pajzderska. On the left side there was an image of a knight in hussar armour, and on the right side there was a soldier in a field uniform and helmet, holding a rifle. In the middle recess there was an allegorical bas-relief depicting three states of contemporary Poland concentrated under the Polish emblem. The heart in the figure was founded by Catholic mothers of the city of Poznan.

The idea of building the monument appeared in 1920 at the Catholic Convention in Poznań. The monument was designed by architect Lucjan Michałowski. The figure of Christ - artist-sculptor Marcin Rożek. After long disputes, the monument was located within the Imperial District, on the site of the Bismarck Monument, demolished in 1919, in the area of the present-day Poznań Monument of June 1956 (Mickiewicz Square). The ceremony of unveiling and consecration of the Monument to the Sacred Heart of Jesus, which took place on the feast of Christ the King on 30 October 1932, became a profound religious experience and a great national manifestation. The celebrations were attended by numerous Poznań residents, led by Cardinal August Hlond, who consecrated the monument. The monument was erected with social contributions.

In October 1939 the monument was demolished by a decision of the Third Reich administration occupying Wielkopolska. The destruction was personally managed by Eckhardt Greiser. The figure of Christ was melted down. The remains of two fingers of Christ, saved by Polish workers, are kept in the Archdiocesan Museum in Poznan. On 3 February 2012, the Social Committee for the Reconstruction of the Monument of Gratitude, headed by Professor Stanisław Mikołajczak, was established in Poznań. On 18 December 2012, the permission to erect the so-called Monument of Gratitude was granted by the Poznań City Council. Since its original place is occupied by two other monuments, the committee proposed to place the monument along John Paul II Street. The proposal for a new location was made by Klemens Mikuła, the general designer of Lake Malta surroundings. Currently, the central element of the Monument of Gratitude, which is to be rebuilt, a new bronze casting of over 5 meters high statue of Jesus Christ, stands under St. Florian's Church, on Koscielna Street in Poznan. In 2016, the statue of Christ was consecrated by Archbishop Stanisław Gądecki, in the presence of the Minister of National Defence Antoni Macierewicz, the army and a large number of Poznań residents. The new proposed location of the monument has not yet been approved by the President of Poznań. 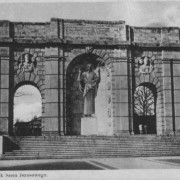