Monument to the Murdered Professors of Lwów

The monument commemorates the murder of Lwow professors carried out after the beginning of the German occupation of Lwow on July 4, 1941, and on July 11 and 26, 1941. 25 academics from Lwow universities and 19 members of their families were killed. This was part of an extermination action against the Polish intelligentsia.

The monument stands in the vicinity of the Wroclaw University of Science and Technology building complex.

Inscription on the pedestal (front): Our destiny a warning.

The inscription on the boards: Here, the ground was laid down with their blood, collected from the place of execution in Lwow. To the memory of 25 professors of Lwow academic schools and members of their families who died in 1941 after the invasion of Lwow by German troops from the bullets of the Nazi oppressors [further names and dates of death are listed: July 4, 11 and 26] On the 40th anniversary of their martyr's death, the senate of the academic schools of the city of Wrocław.

On a separate board: Professors of the Lwow Polytechnic murdered by the Nazis in July 1941 [names, age and function].

Contemporary sculpture made of ceramic mass shows two stylised figures of people in the full expression scene of a shooting. It imitates a naturally cut stone, which symbolizes the steadfast attitude of the Lwow professors. It was placed on a pedestal covered with marble tiles.

The idea of commemorating Lwow's professors by erecting a monument was not a coincidence in Wroclaw's academic community. After the World War II, the Polish eastern territories with Lwow were incorporated into the USSR, and Poland was granted German territories in the north and west (with Wroclaw). The move on the map was accompanied by the deportation of Poles from the Eastern Borderlands and Germans from the so-called "regained territories". In Wrocław, Polish social, scientific and cultural life was organized from scratch. The Lwow academic community continued its activities in Wrocław and had a major share in the organization of Wrocław universities. The initiator was Prof. Henryk Mierzecki, a graduate of the University of Lwow. In 1954, the Intercollegiate Committee for the Remembrance of Lwow Academic Employees was established, consisting mainly of active graduates of Lwow universities. The author of the monument was Borys Michałowski, a Wrocław sculptor and professor at the State Higher School of Fine Arts. The monument was funded by the city authorities and Wroclaw universities. Originally, the communist authorities did not agree to commemorate the Lwow scholars. Contrary to the intentions of the initiators, the monument was dedicated to all Polish scientists who were killed and died during the German occupation. The monument was unveiled during the inauguration of the academic year of Wrocław's universities on 3 October 1964 by Prof. Stanisław Kulczycki - Deputy Chairman of the State Council, the first post-war rector of the merged University of Wrocław and Wrocław University of Science and Technology, the former rector of Jan Kazimierz University in Lwów. The ceremony was attended by representatives of authorities and universities, social organizations, academic youth from universities in the country, the honorary company of the Polish Army and crowds of residents of Wroclaw. Despite the prohibition of any mention of Lwow in his speech, Prof. Kulczycki spoke directly about Lwow professors and the circumstances of their death and mentioned them by name. This part of the speech made a great impression on the gathered and was completely silenced by the official media.

Paying respects at the monument was included in the program for the inauguration of subsequent academic years. The monument was often anointed. Flowers were composed of representatives of scientific congresses, youth and children. During the Solidarity uprising, it was possible to give the monument a shape consistent with the intentions of its originators. In 1981, on the 40th anniversary of the tragedy, the authorities agreed to place plaques with the names of the murdered at the foot of the monument, funded by the senates of Wrocław universities. The plaques were unveiled on 14 November 1981 by members of the families of the murdered to the sound of Chopin's funeral march. The ceremonies were attended by the university authorities, the youth flagship post offices of all academic institutions and crowds of residents. Parallel actions to commemorate the murdered took place in Lwow since the 1960s. Thanks to the efforts of the families of the victims after the fall of the USSR in the 1990s, a modest monument was erected on the site of the execution on Wulecki Hills. In 2008, the initiative to erect a new monument was taken by the Mayor of Wrocław Rafał Dutkiewicz and the Mayor of Lwów Andrij Sadowy. Despite controversies on the Ukrainian side, mainly among Lwów councillors who saw the initiative as an anti-Ukrainian provocation, in July 2011, on the 70th anniversary of the crime, a ceremony of unveiling and consecrating the monument took place with the participation of city authorities, a delegation of Wrocław universities and gathered Poles and Ukrainians. It was created, among other things, from funds from the Wrocław budget, a grant from the Polish Ministry of Culture and Wrocław residents' contributions. Also in 2011, in November, on the occasion of the 200th anniversary of the University of Wrocław, the Presidents of Germany and Ukraine were invited to Wrocław. On this occasion, Polish and German presidents Bronisław Komorowski and Christian Wulff laid flowers at the Monument to the Murdered Professors of Lwow. Viktor Yanukovych, President of Ukraine, who arrived in Wrocław with a delay due to weather conditions, went straight from the airport to lay flowers at the monument.

In addition to paying respects to the scholars, the monument is a testimony to the continuation of the heritage of the Lwow universities in Wroclaw. Every year on July 4, on the anniversary of Lwow events, ceremonies are held in front of both Wroclaw's and Lwow's Monument with the participation of the city authorities and delegations of Wroclaw universities. Each year, on 15 November, the day of the Wrocław Science Festival, official ceremonies are held at the monument. 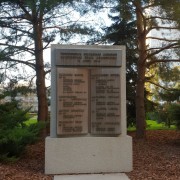 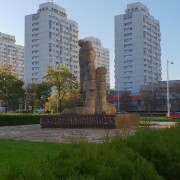 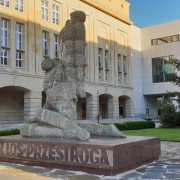 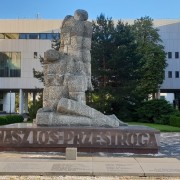