The monument commemorates the Home Army soldiers (of the Polish independence underground) from the groups acting against the Germans in the Świętokrzyskie Mountains under the command of the legendary Jan Piwnik aka 'Ponury'.

The monument stands in the centre of the Wykus nature reserve, on a hill among forests in a small clearing.

The inscription on the frieze crowning the monument: "Passer-by! Bear the news that we died for the Homeland".

An inscription on the plaque in the middle of the chapel: "IN HONOR TO THE FALLEN IN THE FIELD OF GLORY IN THE YEARS 1943-1944 SOLDIERS OF PARTISAN UNITS A.K. [HOME ARMY] COMMANDED BY "PONURY" AND "NURT", THIS MONUMENT WAS ERECTED BY COMRADES-IN-ARMS. WYKUS 15 SEPTEMBER 1957".

Inscriptions on walls (plaques): more than 100 pseudonyms of soldiers from the "Ponury" and "Nurt" groups killed during the war.

Monument made of sandstone blocks in the style of a roadside shrine characteristic for the folklore of the Kielce region. In the upper part of the front of the monument there is a painting of Our Lady of Sorrows by the painter Edwarda Przeorska. The top is decorated with a cross. The covering was made of tile. There is a wall at the back of the plaque, with inscriptions on it.

After World War II the Home Army soldiers were persecuted by the communist authorities - imprisoned and murdered. The Home Army became an object of aggressive propaganda, and the truth about its activity was deceived. The attitude towards the Home Army partly changed after the October Thaw in 1956. Most of the Home Army members were granted amnesty. The issues related to the Home Army appeared in publications and film. Some of the soldiers started to operate in the licensed Union of Fighters for Freedom and Democracy (ZBOWiD). However, until the end of the Polish People's Republic, the circle of former soldiers was under surveillance by the Security Service. The thaw also created the conditions for erecting the first monuments dedicated to the Home Army soldiers. In 1957, the Starachowice group of former sub-commanders of "Ponury" and "Nurt" put forward an initiative to erect a monument in the form of a chapel, dedicated to the fallen and murdered comrades-in-arms from 1943-1944, in the place of partisan concentration on Wykusa - in the centre of the Świętokrzyskie Mountains. Architect Mieczysław Twarowski made the first drafts of the project. In the spring of 1957, a legal Committee for the Construction of the Memorial Slab in Wykusa was established at the Board of the ZBoWiD Branch in Starachowice. The submitted project was officially approved by the administration, however, it was opposed to place a cross on the top of the chapel (it was to be replaced by the state emblem). At the same time, the committee tried to inform about the initiative of the former comrades-in-arms, scattered all over Poland. One of the first actions of the former Home Army soldiers on such a scale attracted the attention of the authorities and caused a wide surveillance of the environment by the security authorities all over the country. Meanwhile, the collection announced by the committee met with a positive social response. After the construction was completed in August 1957, the committee sent out information and invitations to participate in the ceremonies of unveiling and consecrating the monument. The authorities gave permission to organize them, but at the same time tried to prevent the interested parties from taking part in them by all means, and sent secret collaborators to the celebration. The ceremony on 15 September 1957 was attended by around 1500 people (Security Service estimated the number at 600). A mass and an appeal of the dead took place. For former partisans it was the first meeting after the war and the beginning of their further activity.

After the unveiling of the chapel, further work was carried out around it (fence). At the same time, the veterans decided to bring the monument to the condition originally planned, i.e. to remove the national emblem from the monument and install a cross in its place. The Security Service, informed about these plans by a secret informant, decided to organise an ambush. On 26 October 1958, former partisans were arrested during the renovation work for 48 hours. However, the investigation initiated in the case of removing the state emblem was quickly terminated, only finding a violation of the construction law. The environment of the Świętokrzyskie Partisan Groups of the Home Army 'Ponury' - 'Nurt', was created on the occasion of the activities around the monument, and despite constant surveillance, lasting until 1990, every year began to meet in Wykusa for meetings called 'concentrations'. In 1985 the chapel was solemnly handed over to the Cistercians from the monastery in Wąchock, to which the remains of the commander were ceremonially transferred in 1988.

The monument plays an important role as a place of remembrance for veterans and local patriotic ceremonies commemorating 'Ponury" and 'Nurt', which gather people from all over the country.  Since 1996, i.e. from the moment of the solemn transfer of the tradition of fighting for independence by the veterans of the Home Army to the Scouting Association of the Republic of Poland, the tradition of Wykus is maintained by the scouts, who meet here every year in June as part of the Rally of Fraternal Teams and organize service during the ceremony. On 28 October every year since 2000, on the initiative of veterans and scouts, a service "The Way of the Cross" is organized in Wykusa. It leads through the battlefields and graves scattered around the "Wykus" hill, where soldiers of the Home Army "Ponury" Partisan Groups, who were killed on 28 October 1943 in a manhunt organized by the Germans, were buried. The last station of the road is located by the monument - chapel. It is attended by, among others, scout and school youth, inhabitants of nearby towns and Home Army veterans. The young people have the opportunity to meet and talk with veterans, witnesses and participants of World War II. 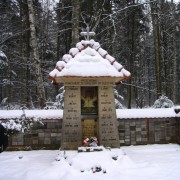 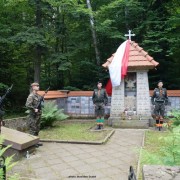