The monument is dedicated to the soldiers of the Underground Polish Army who died in the fight against the communist system.

The monument stands in the park near the street and the pedestrian and bicycle route.

To the memory of the Underground Polish Army soldiers created by captain Stanisław Sojczyński 'Warszyc'. † 19 February 1947 Fallen and Murdered In the Fight Against Communist Enforcement Between 1945 and 1955 They gave their lives for Polish Independence and Human Freedom.

Apart from that, on the left and right side of the monument there are plaques with the names of 230 Underground Polish Army soldiers together with their pseudonym and date of death. There is also an inscription on the pedestal: 'Let us not let the fallen die' Zbigniew Herbert.

The shape of the monument resembles a hill, at the top of which there are stones with bent bars. On the highest boulder there is an eagle with wings spreading out (bronze casting, about 1m high). The body itself is built mainly of granite cubes and stone boulders, the monument is about 10 m wide and 4 m high. It was built on the plan of the letter "V" symbolizing victory.

Underground Polish Army (Konspiracyjne Wojsko Polskie - KWP) was one of the armed organizations established after the dissolution of the Home Army, whose aim was to fight against the communist system introduced in Poland after 1945. KWP commanded by Captain Stanislaw Sojczyński a.k.a. "Warszyc" operated mainly in the Lodz region. One of the most famous actions of KWP was a short capturing of Radomsko and releasing several dozen prisoners from the local prison. The project of building the monument was carried out by the 'Pamiętamy' ('We remember') Foundation, which works to commemorate the soldiers of the anti-communist underground, with the support of the Committee for the Protection of Memory of Struggle and Martyrdom and the City of Radomsko. The sculptor Marek Szczepanik was entrusted with the execution of the monument. The unveiling ceremony took place on September 26th, 2010, attended by, among others, KWP soldiers, representatives of the city authorities and non-governmental organizations. The monument was consecrated by Archbishop Stanisław Nowak. The ceremony was part of the celebration of the Polish Army Conspiratorial Year.

For several years now, there has been a strong trend in Poland to commemorate the soldiers of the post-war independence underground (popularly known as the Cursed Soldiers). For this purpose, since 2011, the National Day of Remembrance of the Cursed Soldiers was established on 1st of March. For decades, participants of the armed anti-communist resistance could not be properly honored or commemorated, hence the activities in this direction visible in the last few years. The main purpose of the exposition of the Cursed Soldiers and cultivating the memory of them is to stress the Poles' opposition to the communist system imposed by force after the war; to point out that those who did not drop their weapons but died fighting for Poland's full independence are worthy of the highest honour. At the monument, ceremonies are held to commemorate the National Day of Remembrance of the Cursed Soldiers. They are attended by representatives of local authorities, veterans', trade union and non-governmental organizations. 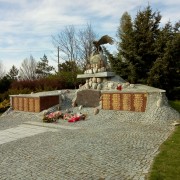 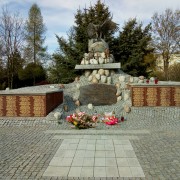 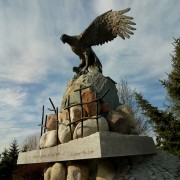 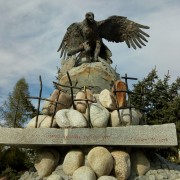 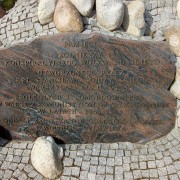 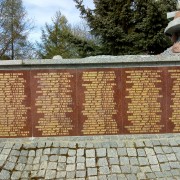