The monument was dedicated to the participants of the battles for Lviv and Eastern Malopolska, fought with Ukrainians and Soviet Russia, fallen in 1918-1920.

Lviv, Cemetery of the Defenders of Lviv, Stefan Banach Street

The monument is the central point of the spatial composition of the Cemetery of the Defenders of Lviv (Cemetery of the Eagles), which is an autonomous part of Lychakiv Cemetery; it is surrounded by quarters with regular rows of crosses.

The monument is an integral part of the cemetery. It represents the art déco style. Its central part is a monumental triumphal arch decorated on one side with the relief of a sword, and on the other side with a Latin inscription and two pylons flanking it. On the right, a list of the most important battlefields from the period of Lwow's defense was carved out, on the left, the most important battlefields in Eastern Lesser Poland from 1918 and 1919. From the side of Pohulanka, on both sides of the arch, powerful sculptures of lions holding knightly shields with the Soviet Coat of Arms of Lwow were placed on the pedestals (in the first version - on the left shield there was the coat of arms of the city, and on the right - the emblem of the Polish state and inscriptions). Originally (before the devastation) the wings of a semi-circular colonnade converged towards the triumphal arch. Each of them consisted of 6 stone doric columns connected on top of the doric architrave.

At the time of regaining independence in 1918, the shape of the borders of the Polish state was not determined. The process of their formation lasted until 1922. The battles for Lwów and Eastern Malopolska were part of the Polish-Ukrainian war for land between San and Zbruch rivers, which ended in July 1919, when the Polish army pushed Ukrainian forces out for Zbruch and the Polish-Bolshevik war of 1919-1921. The defenders of Lwów, many of whom were under 17 years old, were given the nickname "Lwów Eaglets". After the end of the fights for Lwow, the Polish authorities decided to exhume the fallen defenders, so far hidden in makeshift cemeteries, and move them to a specially designated area, next to Lychakiv Cemetery. After the funds were raised, thanks to social generosity, a competition for the mausoleum of Lwow defenders was organized in 1921. The author of the winning design was Rudolf Indruch, a student of the Faculty of Architecture at the Lwow Polytechnic, a participant in the fights for Lwow of Czech-Slovakian origin. The project, approved by the central and local authorities, was also executed by architect Antoni Nestarowski (whose son died in defense of Lwow). Next to the chapel (unveiled as the first in 1924) and the catacombs (1932), the Glory Monument was the most important part of the project. Graves were placed between them. On 28 April 1929 a ceremony of consecrating the cornerstone of the monument took place, which was solemnly unveiled on 11 November 1934. The ceremony was attended by representatives of civil and military authorities in Lwow, the Union of the Defenders of Lwow, teams of scouts, members of the Riflemen's Society and crowds of citizens of Lwow, among which many relatives and friends have fallen.

In the years following the unveiling of the monument, it became customary for social and municipal organizations (such as the City of Warsaw and the Union of Polish Women in America) to fund further columns of the monument. After Lwów was incorporated into the USSR, the Soviet authorities showed a lack of interest in the cemetery, and the few Poles who remained in Lwów after 1946 were unable to maintain order there. Gradually, it was devastated and destroyed, used as a meeting place for the social margin and a pastureland, followed by a rubbish dump. Vulgar inscriptions and drawings appeared on the monument. At the end of the 1940s, the stairs leading to it were torn down, and the inscriptions were removed from the shields held by lions, leaving, however, the coat of arms of Lviv and the Polish emblem. The planned devastation was started by the authorities in 1971. Using tanks and construction machines, the colonnade of the monument was demolished, and the inscriptions on the pylons were fired at. Stone lions were taken away to other parts of the city. Despite attempts to keep the devastation secret, the information got to the West. Polish emigration made unsuccessful attempts to defend the cemetery and sent appeals to the communist leaders. In 1989, the reconstruction was started illegally and free of charge by a Polish construction company. The works and their financing were joined by local Poles and participants of numerous trips from Poland. The reconstruction, supported and coordinated by Polish authorities and institutions, with the participation of Polish specialists, was interrupted and resumed depending on the state of Polish-Ukrainian relations. The breakthrough came after Poland's involvement in the 'Orange Revolution'. With the kindness of President W. Yushchenko, despite the opposition of some of Lviv's city councilors, the reconstruction was completed. The ceremony of consecrating the cemetery in 2005 was attended by, among others, presidents of both countries, representatives of the diplomatic corps of France and the USA and several thousand Poles. The final shape of the necropolis and the central monument is the result of agreements between Polish and Ukrainian authorities. The monument is the most changed from its original part. In 2015, as a result of the efforts of the Polish side and with the consent of the Lviv conservator, stone lions were restored (however, without the original symbols and inscriptions).

The Eagle Cemetery is a permanent subject of the Polish-Ukrainian dispute, and one of the most controversial parts is the Glory Monument. In early 2016, the Lviv Regional Council questioned the legality of restoring the stone lions and asked the services to investigate whether they were anti-Ukrainian in nature and to demand their removal, which the Polish Ministry of Foreign Affairs protested against. Since then, the statues have remained covered with plates of plaster. The official reason was to prepare them for renovation. In 2018, the Lviv council reiterated its demand to remove the lions as 'a symbol of Polish occupation of Lviv'. The central authorities of Ukraine refused to intervene, claiming that the matter remained the responsibility of local authorities. In the following years, there were several incidents in which young people from Poland arbitrarily tried to tear off pieces of plasterboard or in any other way manifest their opposition to the veiling of the monuments. They met with the reaction of the Ukrainian police and ended up in court. The cemetery, of which the Glory Monument is a part, as one of the most important places connected with Polish heritage in the Eastern Borderlands, remains a place of special significance for Polish identity. It is also of special importance for people who have family ties with Lviv (born in Lviv or whose ancestors come from there). It is constantly visited by Poles in great numbers. At the monument, state ceremonies commemorating the defenders of Lviv are held with the participation of representatives of the Polish authorities, veterans, scouts and society (including Poles living in Ukraine). Since 2003, candles have been placed at the monument every year on 1 November as part of the 'Lychakiv Cemetery Memorial Light' campaign. Over the years, the action has been attended by representatives of Polish and Ukrainian authorities, diplomats, volunteers representing Polish organizations and local educational institutions, scouts, as well as residents of Lviv, including students and school children. On November 1, near the monument, a joint Polish-Ukrainian funeral mass is also celebrated, after which representatives of the Polish and Ukrainian authorities lay wreaths on the graves of Polish defenders of Lviv and at the nearby monument of the Ukrainian Galician Army, i.e. units that fought against each other for Lviv, as well as on the graves of soldiers killed in Donbass. In tourist guides, the necropolis, of which the monument is a part, is indicated as one of the most beautiful war cemeteries in the world. 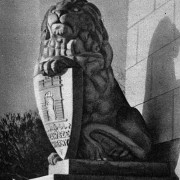 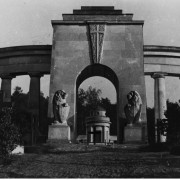 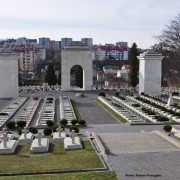