Monument to the Fallen and Murdered in the East

The monument was erected to commemorate Polish citizens - victims of Soviet aggression on 17 September 1939, deported to gulags or exiled to Siberia, and officers of the Polish Army murdered in Katyn.

The Monument to the Fallen and Murdered in the East is located on Matki Sybiraczki Square (between Muranowska and General Władysław Anders streets) in Warsaw.

On the authentic railway track, a standard-sized platform wagon is set up, filled with crosses. Next to the Catholic and Orthodox crosses there are Muslim and Jewish religious symbols, they symbolize the multinational and multi-religious character of the Eastern Borderlands. Among the crosses made of bronze, one is white, made of stainless steel, and commemorates the murdered priest prelate Stefan Niedzielak on 20 January 1989, the parish priest of St. Charles Boromeus Church at the Powazki Cemetery. The monument is about 7 meters high. Along the track there are 41 bronze-cast railway sleepers. On each of them the name of the town or district from which Polish citizens were deported, or places in the Eastern Borderlands where they fought for their freedom, as well as places of massacre in the East, are engraved. On the first base with the inscription Borowicze, the artist placed his hands folded in a gesture of prayer. On the side wall of the wagon, the emblem of the Republic of Poland - an eagle in a crown, composed in the sign of the Polish Army.

The main initiator of the construction of the monument was Wojciech Ziembiński, an independence activist, founder of KOR and ROPCiO, among others. In 1989, on his and Jan Olszewski's and Jadwiga Zienkiewicz's initiative, the Organizing Committee for the Construction of the Monument to the Victims of Soviet Aggression was established. In 1991 it took the name of the Foundation of Fallen and Murdered in the East. A competition for a monument to commemorate the deported, lost and tormented Poles in Siberia was announced, and a project by the sculptor Maksymilian Biskupski was selected. On September 17, 1995, the monument was unveiled by the President of the Republic of Poland Lech Walesa on the 56th anniversary of the Soviet aggression against Poland. The monument was consecrated by Cardinal Józef Glemp.

In 1999, Pope John Paul II prayed at the monument during his 7th pilgrimage to Poland. Members of the Federation of Katyn Families and veterans' organizations take care of the monument.

The monument became a place of honouring the deportees to Siberia on the occasion of a ceremony on 17 September (day of Soviet agression against Poland in 1939) each year, with the participation of the highest representatives of state and local authorities, a representative company of the Polish Army, veterans and members of the Association of the Siberian Exciles. Speeches are given to commemorate the tragic fate of Poles from the Eastern Borderlands of the Second Polish Republic. Wreaths are laid at the foot of the wagon, and on the track bed people of Warsaw lay flowers and light candles. 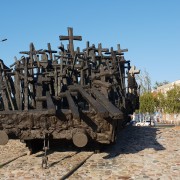 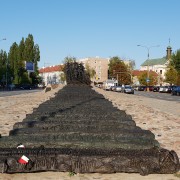 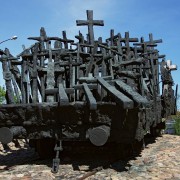