The monument commemorates the Warsaw Uprising (August 1 - October 2, 1944), an armed uprising against the Germans occupying Poland, organized by the Home Army (the armed forces of the Polish Underground State) as part of the 'Storm' action (a military operation organised and undertaken by Home Army units against German troops in the final phase of German occupation, immediately before the Red Army entered). During the uprising, about 20 thousand insurgents and about 180 thousand civilians died. After the fall of the uprising, the Germans expelled the remaining inhabitants and started the planned demolition and burning of Warsaw.

The monument stands on the eastern side of Krasinskich Square, against the background of the Supreme Court building (built in 1999).

On the memorial plaque: [list of airborne divisions that helped insurgent Warsaw]

On the board: "MONUMENT TO THE WARSAW RISING 1944 / ACCORDING TO THE DESIGN OF PROF. VINCENT FORGE / AND ING. ARCH. JACEK BUDYN / BUILT BY SOCIAL COMMITTEE FOR BUILDING THE MONUMENT / CHAIRED BY / BRIG. JAN MAZURKIEWICZ 'RADOSŁAW' / AND PROF. JAN KAROL KOSTRZEWSKI / THE MONUMENT WAS CONSECRATED AND UNVEILED / ON 1 AUGUST 1989 / ON THE 45TH ANNIVERSARY OF THE WARSAW RISING"

On the hatch: "GLORY TO THE HEROES"

On the pillars: [names of all combat units taking part in the Warsaw Rising]

A monumental object consisting of a large, several-part sculpture, mainly made of bronze and granite; 21 columns joined together at the top with dimensions: 154 x 154 cm (height approx. 10 m), - forming the background and brick wall. The dynamic sculpture consists of two elements: the so-called 'rush' - above-natural size soldiers running out of the monumental concrete pylon, symbolizing the beginning of the Rising, and the 'epilogue', depicting the insurgents standing over the entrance to the sewers - symbolizing the end of the Rising in the Old Town and evacuation through the sewers. At the back of the 'rush' part there are bas-reliefs of underground posters from the World War II period, war orders and a commemorative plaque with information about the monument's designer and its construction committee and large candles.

In the communist period, the legend of the Rising, as a symbol of the fight against foreign domination, was fought by the communist authorities, and the history of the break-up was deceived. However, the memory survived mainly among the inhabitants of Warsaw. The first spontaneous social initiatives to build a monument to commemorate the Rising appeared already in 1945. Collections started. The Office for the Rebuilding of the Capital City organized a competition to choose the place and form of the monument. However, the selected project did not come to an end. A discussion about the location and name of the monument appeared in the press. Despite the competitions, plans to build a monument to the 'Fighters of Warsaw' and 'Fighters for Freedom and Democracy' in the late 1940s failed. The initiatives to build the monument in the second half of the 1950s and subsequent competitions resulted in the construction of the 'Heroes of Warsaw 1939-1945' monument. ('Warszawska Nike'), in whose name and date on the order of the communist authorities the Uprising was 'lost'. The climate around the Rising changed a bit in the 80s, when the authorities made a number of gestures towards veterans. In November 1980, on the initiative of Marian Pyzel, an activist of the Old Town Circle of PTTK (Polish Tourist Country-Lovers' Society), the Social Committee for the Construction of the 1944 Rising Monument was established, which included, among others, former insurgents. Soon afterwards it was officially registered and started to collect funds. It met with the support of the Church, artists, urban planners and architects, as well as social recognition, which resulted in great sacrifice. At the same time, the Union of Fighters for Freedom and Democracy (ZBoWiD) - a veteran organization subordinated to the authorities - established its own committee for the construction of the Warsaw Insurgents' Monument. The social committee was subjected to propaganda attacks. Nevertheless, it continued its work and chose the location of the monument ( Krasinski Square). In February 1983 an international competition was announced. Although the prize was only the realization of the monument and not the financial benefit, 65 works were submitted. The competition, decided in April 1984 by the most eminent sculptors, architects, urban planners, city authorities and participants of the Rising, was won by a 5th year student sculptor from the Academy of Fine Arts Piotr T. Rzeczkowski and architect Marek Ambroziewicz. The construction was to start on the 40th anniversary of the Rising. In July 1984, in the atmosphere of press attacks on the social committee, there were several meetings with representatives of the ZBoWiD and the communist party, who demanded that the name 'Rising Monument' be abandoned, quoting the stance of the PZPR Political Bureau. The answer was negative. In July 1984 the social committee was dissolved. The Commissioner's Board for the Construction of the Monument to the Heroes of the Uprising was formed, which took over the money collected so far. The new committee pushed for an interpretation that opposed the insurgents' idea of the Rising and a change of name, which the author of the monument did not agree to. Despite the prize money, only 3 works were submitted to the new competition. Piotr Rzeczkowski refused to participate in the competition. The communist authorities chose the project of the sculptor Wincenty Kućma and the architect Jacek Budyn. Negative opinions about this project were issued by Warsaw urban planning, architectural, scientific and artistic institutions, as well as a college of experts appointed by the Minister of Culture and Art. In March 1988, the associations of architects and urban planners again announced a general competition for the design of the monument under the compromise name - the Monument to the Heroes of the 1944 Warsaw Rising. The competition, for which 58 works were submitted, was boycotted by the authorities and ZBoWiD. The organizers' request to the Minister of Culture and Art to change the decision remained unanswered.  Despite opposition from many circles and in the atmosphere of scandal in 1988, the Warsaw authorities allowed the controversial project of Kućma and Budyna to be implemented. The monument was accused, among other things, of referring to the so-called socrealist style. It was unveiled just after the fall of communism on the 45th anniversary of the Rising on August 1, 1989 by Wojciech Jaruzelski ( at that time the president) and primate Józef Glemp in the place where the canal hatch was located during the Rising, used by the insurgents on September 1 and 2, 1944 for evacuation from the Old Town to the City Centre.

In the following years the monument became one of the places of official commemorations of the Warsaw Rising anniversaries. During the celebration of the 50th anniversary in 1994 at the monument, the German President Roman Herzog was the first ever representative of the German authorities to apologize to the Poles for the crimes committed by the Germans during World War II (although in his earlier statement he confused the Warsaw Rising with the Warsaw Ghetto Rising of 1943). The memory of the Rising lasted, but with time, the social emotions connected with it fell down. The media was dominated by a critical tone towards the Rising. The situation changed after the opening in 2004 the Warsaw Rising Museum: a modern research and educational institution documenting the history of the Rising and the Polish Underground State. Its activities made the anniversary of the Rising one of the most important events for Polish identity. A specific cult of the Rising, which has been born since then, has also raised the rank of memorials (including monuments) connected with it. It was therefore no coincidence that the Warsaw Rising Monument was chosen as the venue for a speech by US President Donald Trump during his visit to Poland in July 2017. Trump referred directly to the monument and the rush commemorated on it and talked to the veterans.

The monument plays an important role as a place for central ceremonies on the anniversary of the outbreak of the Warsaw Rising. On the eve of the anniversary of its beginning on August 31, in the evening, a solemn field mass and appeals of the fallen are held at the monument every year with the participation of representatives of the highest authorities of the state, city of Warsaw, diplomatic corps, army, veterans, scouts, representatives of social organizations and citizens who arrived in large numbers. After the wreaths have been laid by numerous delegations at the monument, an open concert on the themes referring to the Rising begins. The ceremonies are only a part of the annual celebrations of several days, during which representatives of the authorities, veterans and thousands of citizens pay homage to the heroes of the Rising and civilians in various memorial sites in the capital and other cities. The culmination of the celebrations falls on 1 August, which was established in 2009 as the national commemoration day of the Warsaw Rising. Most people gather a minute's silence during the "W" hour - 5 p.m. (when crowds spontaneously stop in the streets, squares, cemeteries and at the monuments of Warsaw to commemorate the insurgents) and at a concert organized since 2006 by the Warsaw Rising Museum at Piłsudski Square, during which, next to professional performers, people from all over Poland, together with the Presidents of Poland and Warsaw and the Prime Minister, as well as veterans, sing insurgent songs. In 2019, it gathered 100 thousand people of various age ( including many children and young people) and 3 million viewers in front of TV screens. Mass participation in the anniversary events shows their importance for society. At the same time, there is still a discussion among historians and commentators in Poland about the meaning of the Warsaw Rising and the insurgent tradition in general. 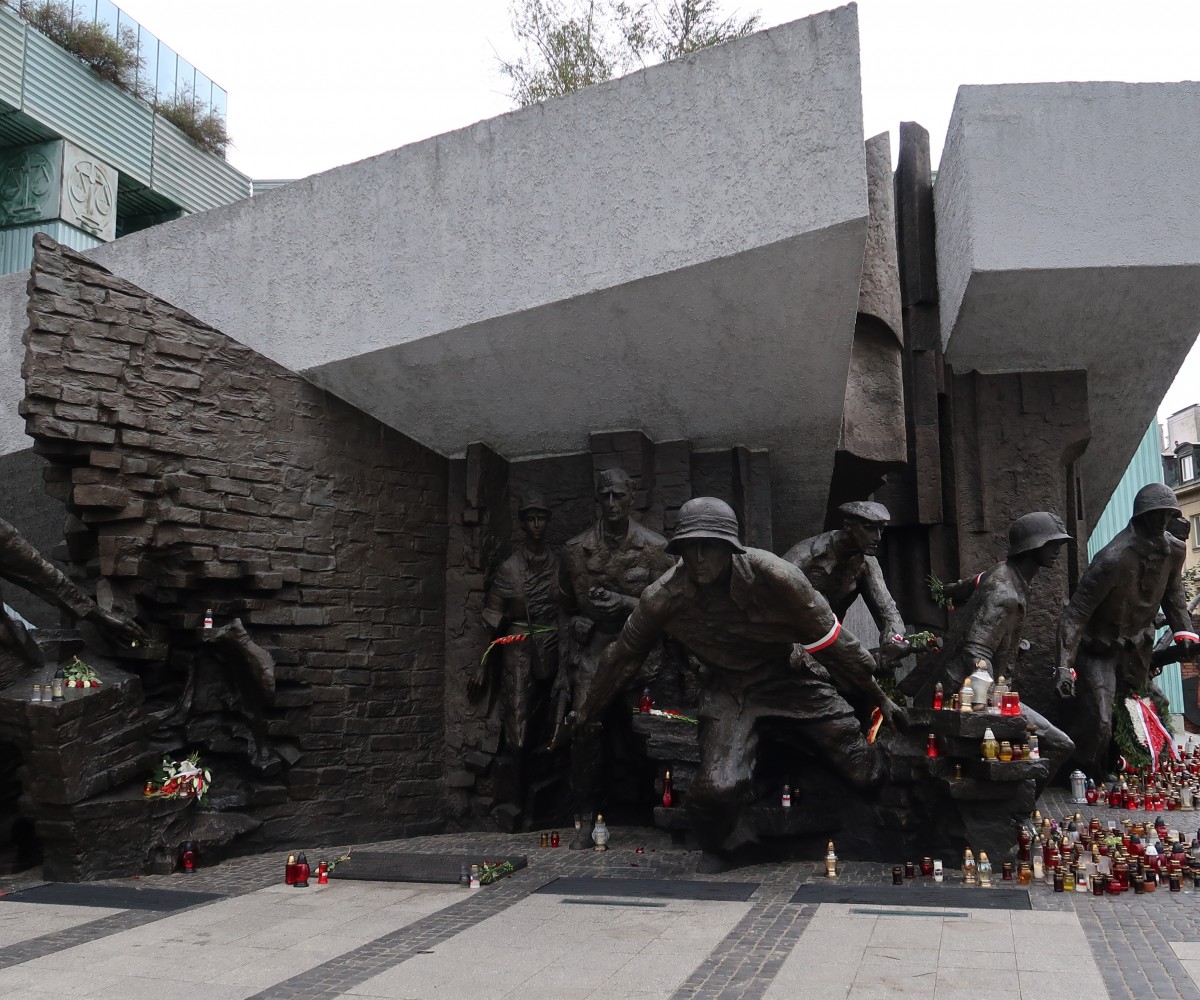 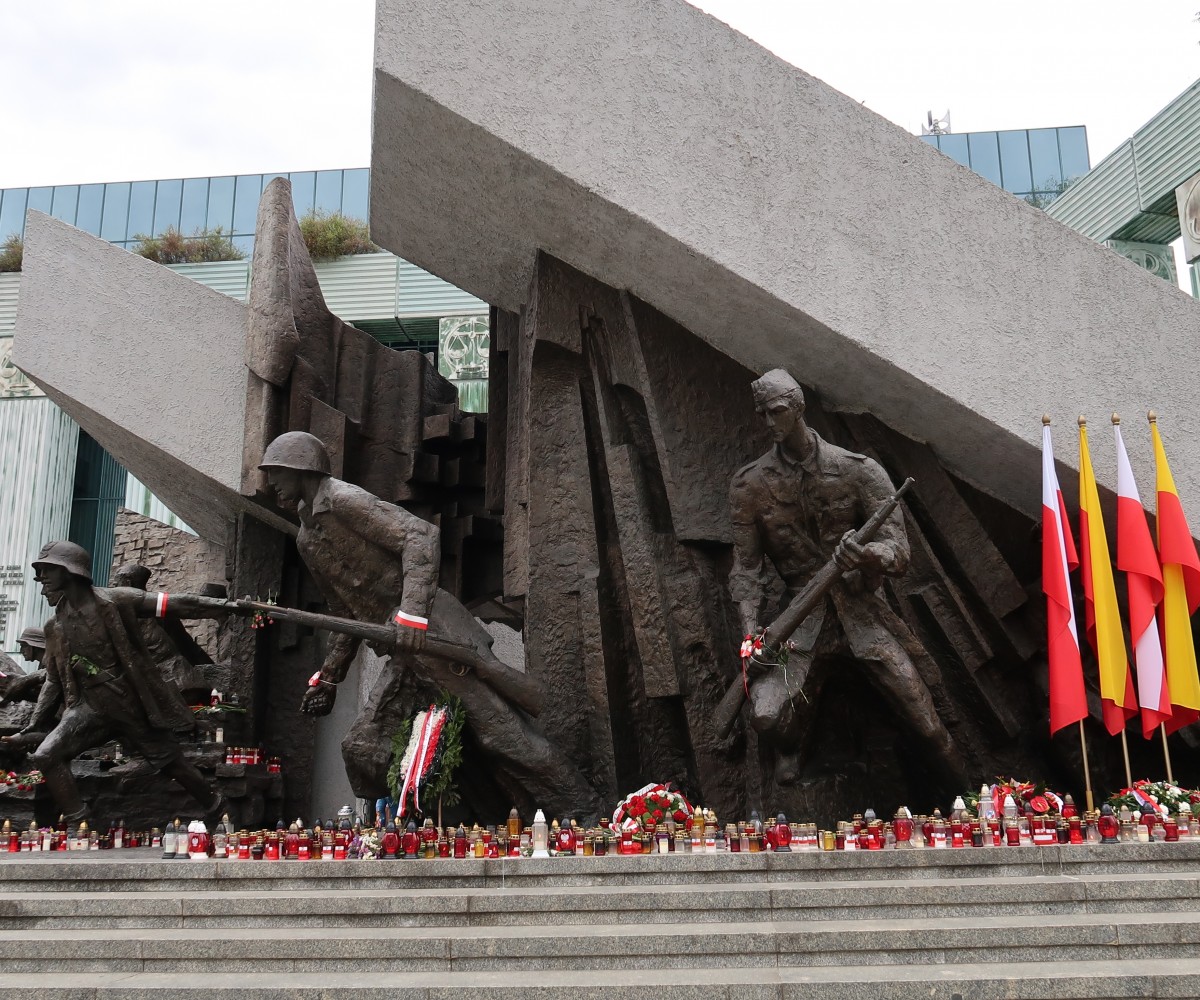 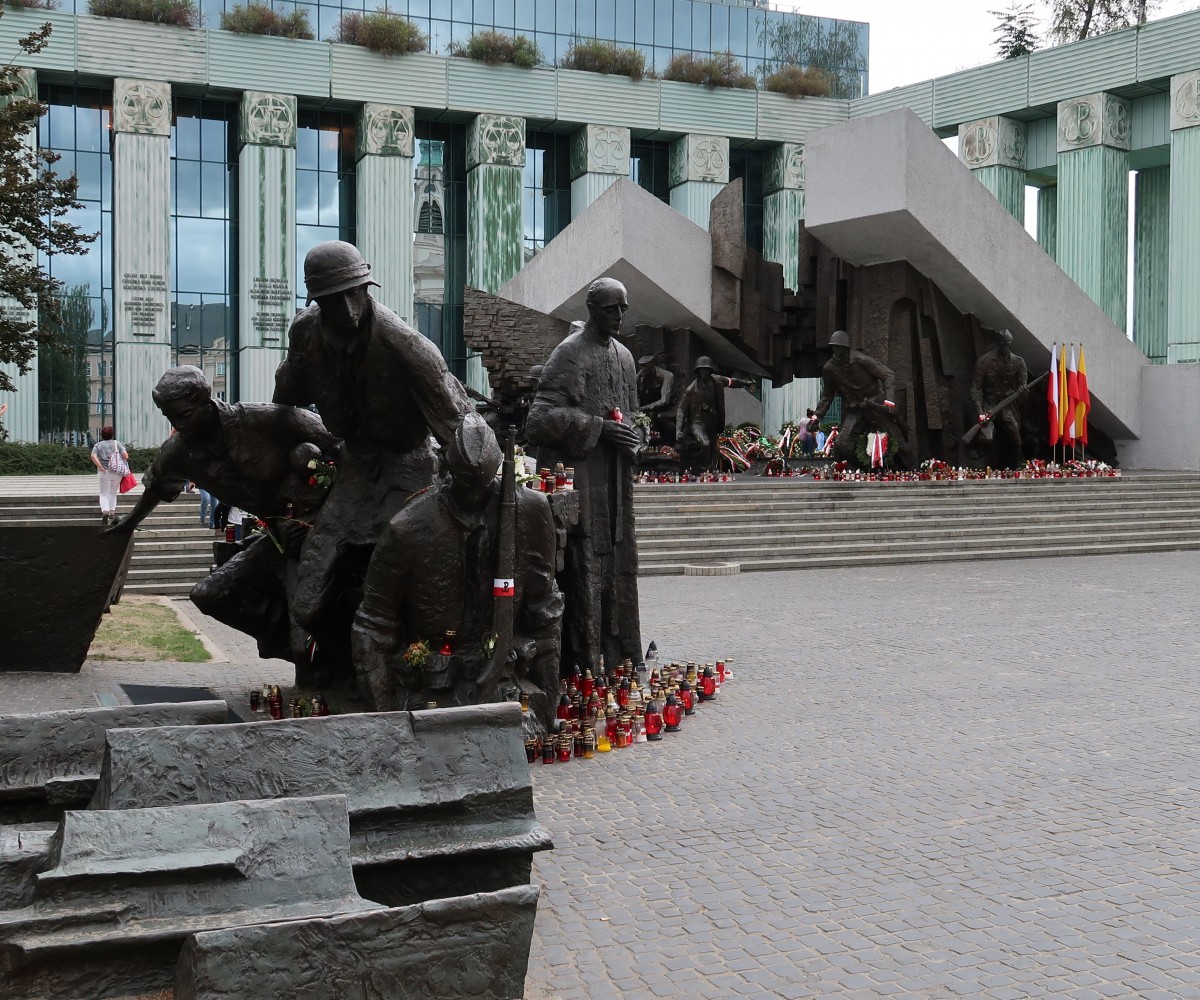 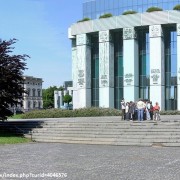 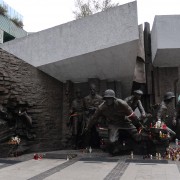 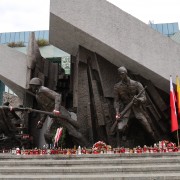 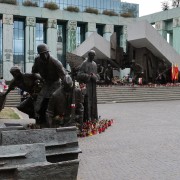