Tomb of the Unknown Soldier

The monument stands on an important square in the Warsaw City Centre from the side of the Saxon Garden.

The inscription on the tombstone: "Here lies the soldier of Poland who died for his homeland"

Inscriptions on boards placed on the walls of the pillars:

[here are the names of battlefields, armed actions and places of execution listed each time]

The inscription on the armour inside the tomb: "On 2 November 1925, the corpses of an unknown Polish soldier were deposited in this place
transferred from the chosen by fate Lwow's battlefield"

The inscription on the coffin: "This coffin contains the corpse of the Unknown Polish Soldier taken from the Lwow grave on 29 October 1925".

The tomb is integrated into a three-course fragment of a crippled colonnade of the non-existent classicist Saxon Palace (about 5 m high). On the pillars there are black granite tablets with inscriptions. Arcades from the side of the Saxon Garden filled with ornamental bars designed by Henryk Grunwald. The bars bear the highest military decorations: Virtuti Militari Cross (in the middle), Grunwald Cross and the Cross of Valour. The tombstone made of grey polished granite (formerly sandstone). Above the tomb a lamp (originally painted fresco with laurel wreath and 2 metal lanterns). The tomb is lined with steel armour. Eternal torch at the head (form changed in relation to the pre-war one). On the outer axes of arcades - four large boilers with earth from World War II battlefields (originally 4 candles). Eclectic candles (formerly classicistic) in front and back of the monument. Wreath stands. The tomb illuminating system consisting of 68 LED lamps and 12 traditional headlights.

The idea of commemorating the nameless heroes who died for their homeland was born after World War I in France. France and Great Britain, where the first graves of the unknown soldier were created in 1920, were followed by other countries. In Poland, efforts to build the monument began in 1921, i.e. three years after regaining independence. Representatives of the highest civil and military authorities were involved in the project. The erection of the monument was preceded by discussions about its form and location. In November 1923, by order of the President of the Republic of Poland Stanisław Wojciechowski, the Provisional Organisational Committee for the Construction of the Monument to the Unknown Soldier was set up, composed of representatives of the Generalicia of the Polish Army, and later of the scientific and artistic community. The Committee started to collect funds. Since the state was unable to cover the costs of the construction from the budget, an appeal was made to the public. The Committee asked the public for voluntary taxation for this purpose (1% of salary). At the end of 1924, at night in Saski Square, an anonymous founder (to whom the Union of Polish Associations of the Republic turned out to be after a few years) laid a sandstone slab with an engraved cross and the inscription "To the Unknown Soldier, Fallen for the Homeland", which later determined the location of the monument. In 1925, the Council of Ministers elected the sculptor Stanislaw Ostrowski as the author of the project. According to the design, the monument was incorporated into the three central arcades of the double colonnade of the Saxon Palace and was originally dedicated to those who died in 1914-1920 and 1918-1920 (for technical reasons, limiting the original idea covering the period 972-1920). In April 1925, a solemn draw was held, which decided that the remains of an unnamed soldier would come from the 1918-1919 Lwów Battlefield. On 29 October 1925, a formal exhumation ceremony was held at the Cemetery of the Eagles in Lwów. One of the three excavated coffins was chosen by Jadwiga Zarugiewiczowa, a Polish Armenian woman, the mother of a soldier who died in battle with the Bolsheviks at Zadwór (in the battle called the Polish Thermopylae) and whose body was not found. The procession with the remains of a teenage soldier was walking along the streets of Lviv and then, after being transported by rail, Warsaw. The procession and funeral ceremonies, celebrated in a military ceremony, from 30 October to 2 November 1925, were attended by representatives of the highest Polish authorities, officer corps and army, the papal nuncio, clergy of all faiths, foreign delegations and crowds of inhabitants. Right behind the coffin, the mothers of fallen soldiers, widows and orphans of soldiers and war-disabled people took their place. Squadrons of airplanes flew over the conductor. Together with the coffin in the tomb, urns with soil from 14 randomly selected battlefields were placed. An inscription was placed on the tombstone: 'Here lies the Polish soldier who died for the Homeland'.

Since the moment of the foundation, the most important national holidays were celebrated at the monument and military parades were held. Initially, the public's interest was so great that pushing the crowd of visitors caused damage and it was necessary to set up a police cordon to regulate traffic. During the German occupation of 1939-1945, the grave was a place of particular importance and revered by Poles. With the risk of life, flowers were laid on it. The Saski Palace became the seat of the Wehrmacht. A German flag was hung over the grave. From May 1942 the Saski Garden was closed to the Polish population. During the Warsaw Uprising of 1944, the Germans located selected military units in the area of Saski Square, so the insurgents did not manage to capture it. After the Rising, German troops started a planned demolition of Warsaw. On 28 December 1944 the Germans blew up the Saski Palace. The building was destroyed, but a fragment of the colonnade over the Tomb of the Unknown Soldier partially survived. According to an unconfirmed legend, the German sapper did not dare to blow up the grave where the unknown soldier was buried and did not plant explosive charges there. The new Polish military authorities, subordinated to the USSR, decided to rebuild the grave before the end of war. The flame was lit. During the process of rubble removal from the capital in May 1945, the grave and its surroundings were cleaned up. Guards of honour were put up. The tomb was rebuilt according to the design of architect Zygmunt Stępiński as a ruin-symbol. Only the three central arcades of the colonnade of the now nonexistent Saxon Palace were renovated. 4 pre-war battlefields' plaques were replaced with 6 new ones, commemorating the fight 'against fascism and hitlerism' in the years 1936-1945. The eagle decorating the grating was deprived of its crown. The date 1792 (the year of its establishment to commemorate the victory in one of the battles of the Polish-Russian war) was removed from the Virtuti Militari medal. The date 1920 (commemorating the victory over the Bolsheviks) was removed from the Cross of Valour and replaced by 1918 (later, after the fall of communism in Poland, the original form of decorations was restored). The highest new decoration of the Grunwald Cross was added. The plate was replaced. During the unveiling and consecration of the tomb on 8-9 May 1946, the land of 24 battlefields was laid. The ceremony was attended by government representatives, the army and foreign delegations. A 24-hour guard of honour was introduced. In the following years, appeals of those who died on the anniversaries of the end of World War II were held here. In 1964 and 1973 the grave with its surroundings underwent renovation. On 2 June 1979, John Paul II prayed at the tomb during his first pilgrimage to Poland. On 18 April 1989, the earth from the Katyn graves was placed in the tomb. On 11 November 1990, pre-war plaques were unveiled. In the following years (1991, 2016, 2017), more plaques were unveiled with the names of battlefields and places of execution from the years 972-1683, 1768-1921 and 1939-1945, as well as a plaque dedicated to aviators and sailors, Cursed Soldiers ( of the anti-communist underground from 1945-1963) and soldiers defending the local community against Ukrainian nationalists from the OUN and UPA (which aroused opposition of the Ukrainian IPN). In 2019, during ceremonies commemorating the 80th anniversary of the outbreak of World War II, German President Frank-Walter Steinmeier, in the presence of representatives of Polish authorities, foreign delegations, veterans and gathered crowds, asked for forgiveness for Germany's historical guilt for the unleashing of war and suffering that Germany brought to Poland and the whole Europe. In his speech he referred to the Tomb of the Unknown Soldier: 'Look at the Tomb of the Unknown Soldier, look at the heroism and unbreakable love of freedom of the Polish people. They are a shining example to all the proud nations of Europe, so numerously gathered here today'.

The monument plays an important role as a venue for central public holiday celebrations on 3 May, 15 August, 11 November. This is when a ceremonial change of guard of honour takes place at the monument, with the participation of troops of all types and a parade. The ceremony is attended by representatives of the highest Polish authorities, invited guests and crowds of inhabitants. Wreaths are then laid at the monument (according to the military ceremony). The importance of the grave is emphasized by the introduction of an obligation to be visited by foreign delegations visiting Poland in the diplomatic protocol and the fact that there is a 24-hour and year-round guard. Currently, there is a discussion in Poland about the reconstruction of the Saxon Palace, so about the shape of the Tomb of the Unknown Soldier. On the 100th anniversary of regaining independence, President Andrzej Duda signed a declaration on the restitution of the Palace. Talks between representatives of the State Treasury and the authorities of the capital city were undertaken in this matter. At the same time, fears are raised that the reconstruction of the palace's colonnade will lead to the irretrievable destruction of the unique symbol, which is in common consciousness the shattered colonnade - the symbol of Fighting Warsaw and barbarism of the occupants. The issue of the palace's reconstruction also appears in the context of the discussion in Poland and Germany about paying reparations (compensation) for World War II to Poland. 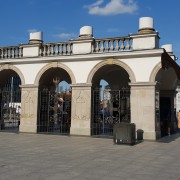 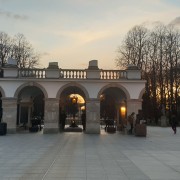 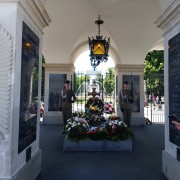 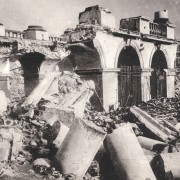 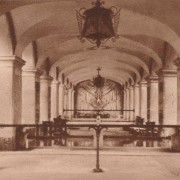