The monument is dedicated to the victims of the Katyn massacre - a communist crime, committed by the decision of the highest authorities of the USSR by murdering about 22 thousand Polish citizens (including about 10 thousand army and police officers).

The monument stands in the Katyn Valley at the Powazki Military Cemetery - one of the most important Polish necropolis.

The monument has the shape of a 4.5-metre high cross, erected on a small pedestal. The cross, the pedestal and the flanking plinths have been provided with inscriptions. At its feet there is a small flat tombstone with inscriptions. Nearby there is a 'government' monument - made of granite, a few-tonne 4-meter cross-monument.

In the spring of 1940, on the territory of the Soviet Ukrainian and Belorussian republics, the NKVD killed, with a shot in the back of the head, Polish citizens - prisoners of war from Katyn, Charkov and Kalinin (Tver) and prisoners (military and civilians). During the Polish People's Republic the truth about the Katyn crime was hidden by the authorities and its perpetration was attributed to the Germans. The truth about it was treated as an act of violence against the "regime and alliance with the USSR". The first attempts to commemorate the victims of the crime at the Powazki Military Cemetery were made in the 1950s. On the anniversaries of 1 August (Warsaw Rising), 17 September (Soviet aggression on Poland) and 1 November (All Saints' Day) wooden crosses and candles were secretly erected, leaflets were left. Since the 1970s, the anti-communist opposition has been fighting intensively against the Katyn lie, also working to commemorate the victims of the crime. Since 1974, unofficial partiotic and religious ceremonies have been organized at the site of the present monument to commemorate the murdered, which gathered thousands of people. Such activities were strongly fought by the authorities through repression and surveillance. In 1981, an illegal Civil Committee for the Construction of the Katyn Monument was established. On 31 July 1981, on the initiative of Rev. Stefan Niedzielak and Stefan Melak (who later died on 10 April 2010 in the Smolensk catastrophe, flying on the celebration of the 70th anniversary of the Katyn Massacre), the Committee placed in the valley a 4.5 meter high stone cross made in conspiracy, with the forbidden date '1940' and an eagle in the crown, the inscription 'Katyn' and the letters 'WP' and posts with the names of NKVD camps. The same night the monument was taken by the Security Service.

The new public Civic Committee for the Construction of the Monument to the Victims of the Katyn Massacre has set itself the goal of erecting another monument. On December 6, 1981, the cornerstone and the erection act were laid and a temporary birch cross was erected. After the declaration of martial law on 13 December 1981 they were removed by the militia. In 1983, the union of ZBoWiD veterans, subordinate to the communist authorities, applied for the construction of the monument with a false inscription. The Warsaw authorities launched a contest for the design of the Katyn monument, which was won by sculptors Adam Myjak and Janusz Pastwa. Installation of this monument, bearing the inscription 'Polish soldiers resting in the land of Katyn' was stopped after the intervention of the USSR embassy. The authors did not agree to change the inscription to suggest that the perpetrators of the crime were Germans. The area was fenced and supervised, and the monument was placed in the cemetery warehouses. At the beginning of 1985, the communist authorities without any announcement placed here a granite cross by sculptor Ryszard Cichocki with the inscription: 'To Polish soldiers of the victims of Nazi fascism resting in the Katyn land - 1941'. The inscription caused indignation both in Poland and Germany and was the subject of diplomatic interventions. Since 1982, numerous patriotic demonstrations have taken place in the Katyn Valley on the occasion of successive anniversaries, during which the truth about Katyn was demanded. In 1989, Father Stefan Niedzielak was murdered by the so-called 'unknown perpetrators', probably in connection with his activities to commemorate the victims of Katyn. On the wave of Perestroika in April 1989, an inscription was unveiled on the monument:  'To Polish officers murdered in Katyn'. In the same year, at the request of the Warsaw Katyn Family, the inscription was corrected and supplemented by adding the names of the POW camps and the date 1940. The letters were ripped off at night by 'unknown persons'. In April 1989, the representatives of the Council for the Protection of the Memory of Struggle and Martyrdom and the families of the victims took an urn with the land in Katyn, which was then deposited, among others, in the Katyn Valley. In July 1989, at night, a 1981 social monument was brought to the cemetery grounds. On August 25, 1993, during his visit to Poland, the President of Russia Boris Yeltsin laid flowers at the government monument and said the word 'Forgive' to the representatives of the Katyn families. On July 31, 1995 the ceremonial unveiling of both monuments, social and governmental, took place. The 1981 social monument was the first Katyn Monument in Poland to commemorate the murder of Polish prisoners of war. Both monuments are sometimes treated as one and are called the Katyn Cross. 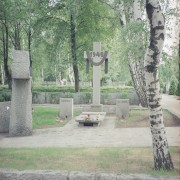