Monument to the victims of the Treblinka extermination camp

A spatial and monumental complex on the site of the former German death camp Treblinka II, commemorating 800,000 Jews murdered by the Germans in 1942-1943.

The monument is part of the complex 'Treblinka Museum: German Nazi Death Camp and Labour Camp 1941-1944', which, apart from the area of Treblinka II (where the monument stands), includes the area of the former Labour Camp (Treblinka I) and the execution site and the so-called Black Road connecting the two camps.

The inscription on the stone tablets: 'From July 1942 to August 1943 there was a Nazi death camp in this area, where over 800,000 Jews from Poland, the Soviet Union, Yugoslavia, Czechoslovakia, Bulgaria, Austria, France, Belgium, Germany and Greece were murdered. On August 2, 1943, the prisoners raised an armed revolt, which was bloody suppressed by the Nazi executioners / within a 2 km distant camp, the Nazis murdered about 10,000 Poles between 1941 and 1944'. [writing in 6 languages]

Over 200 inscriptions on the stones: [the names of the towns from which the Jews were taken to Treblinka; furthermore: 'Janusz Korczak / Henryk Goldszmit/ and Children and Warsaw Ghetto Martyrs'].

The structure was built mainly of concrete and granite. The borders of the former camp are marked by two-meter-high stones, the entrance gate is commemorated by two concrete blocks. In front of the gate there are 7 stone plaques with descriptions of the history of the camp in 6 languages and a plan of Treblinka I and II camps. A cobbled road leads from the gate to the ramp, whose stones symbolize Jewish shtetls. Concrete sleepers also lead to the ramp - a symbolic railway track.  Next to the ramp, 11 boulders were placed, on which the names of the countries from which the victims were deported were engraved. From the ramp to the monument there is a paved road that led to the gas chambers. On its sides, stones were used to mark the sites of the former barracks-dismissaries. The central element of the foundation is a monument built on a hill, in place of the former gas chambers, built of large untreated granite blocks, which are supposed to resemble the Wailing Wall in Jerusalem. The front wall is as if cracked. On the top, reliefs depicting human figures entitled 'Martyrdom', 'Women and Children', 'Fight', 'Survival', as well as blessing hands (a symbol from Jewish tombstones) and menorah are engraved. In front of the monument there is a granite jagged block with an inscription. Behind the monument a crematorium in the form of a jagged hollow rectangle filled with black basalt, surrounded by lamps (symbolizing a pile of human bodies) is commemorated. On the 22,000 m2 of concrete surface, 17,000 stones of various sizes (symbolizing a matzeva) were placed.

The Treblinka extermination camp (1942-1943) was the second largest extermination center, after Auschwitz-Birkenau, built by the Germans in occupied Europe as part of the 'Operation Reinhard', aimed at exterminating the Jewish population. It is estimated that about 800 thousand people (mostly Polish citizens) lost their lives there. On August 2, 1943, a rebellion (uprising) and the escape of about 400 prisoners, organized by the camp conspiracy, took place here. After the liquidation of the camp, the Germans tried to erase all traces of its existence. In 1947, under pressure from Jewish organizations, the communist authorities of Poland took action to secure the camp grounds and commemorate the victims. The Sejm passed a law to commemorate Treblinka II and the nearby labour camp Treblinka. A Committee for Commemoration of Treblinka Victims was established. A competition for the commemoration project was held and decided on, but the realization was delayed. Due to the passivity of the authorities, the Committee ceased its activity. The decision to erect the monument -mausoleum was made in 1955. The new contest was won by a project of Gdańsk artists: sculptor Franciszek Duszeńko and architect Adam Haupt (later joined by Franciszek Strynkiewicz, author of the so-called Execution Wall). Due to the lack of funds and the necessity to expropriate almost 200 owners of the surrounding land, the construction was delayed. The events of the 1960s, especially the trial of Adolf Eichmann, created an atmosphere conducive to commemorating the victims of German crimes. The Honorary Committee for the Construction of the Monument in Treblinka, established in 1960, launched an extensive fundraising campaign involving the diplomatic missions of the Polish People's Republic. The official unveiling of the monument on May 10, 1964, which took place with the participation of representatives of the state authorities, gathered about 30 thousand people from Poland and abroad, including several surviving camp prisoners and representatives of Jewish organizations. The monument was part of the Mausoleum of Struggle and Martyrdom in Treblinka.

Since 1964, every year at the turn of April and May, parallel to the anniversary celebrations of the Warsaw Ghetto Uprising, ceremonies in honor of the victims of the German death camp were held. With time, the stones were marked with the names of the towns from which at least 1000 Jews were transported to Treblinka. Currently, there are over 200 of these inscriptions. In 1978, a stone was unveiled dedicated to the teacher and writer Janusz Korczak and his pupils from the Warsaw Orphanage, who were murdered in Treblinka. It is the only personal commemoration on the site (25-30 thousand names of the victims have been collected so far, the rest are still anonymous). In 1986 the Mausoleum was transformed into a branch of the Regional Museum in Siedlce and named the Museum of Struggle and Martyrdom in Treblinka. During the communist period, the communist authorities pursued a historical policy that aimed at polonization or internationalization of the issue of victims. The Jews were to be only one of the many ethnic groups murdered in the camp, of which Poles were most often mentioned first. This monument was a kind of breakthrough in this trend and was probably the only monument in the entire Eastern Bloc at that time, commemorating the site of Nazi German crimes, which so clearly indicated the Jewish origin of the victims. At the beginning of the 21st century, the site of the memorial in Treblinka was visited and cleaned up by volunteers as part of the Sign of Penance Action (founded by German Protestants as a reaction to the indifference of a part of German society to the harm done by Germans to other nations during World War II). In 2018, the museum became an independent self-governing cultural institution under the name: 'Treblinka Museum. German Nazi extermination camp and labor camp 1941-1944'. The use of the word 'German' in the name had a meaning in the context of the false term 'Polish extermination camps' which appeared especially in the West.

At present, the complex of the former camp is a memorial and testimony to the crime of genocide. The memorial is visited by delegations of politicians and groups from all over the world, including pupils and students, who pay homage to the murdered and at the same time have the opportunity to learn about the history of the camp. Every year on August 2nd, the anniversary of the prisoners' rebellion, ceremonies are held with the participation of representatives of state, local and church authorities, Jewish communities, cultural institutions and the diplomatic corps. The ceremonies also take place on the National Day for the Remembrance of the Victims of German Nazi Concentration and Death Camps established on June 8, 2006 by the Polish Parliament on the 66th anniversary of the arrival of the first mass transport of prisoners to Auschwitz. The monument is considered to be one of the most outstanding of all monuments commemorating the Holocaust and a point of reference for other Holocaust memorials (it was referred to, among others, during the debate on the project of the Monument to the Murdered Jews of Europe in Berlin). 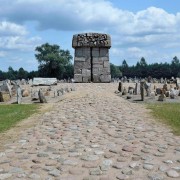 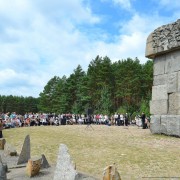 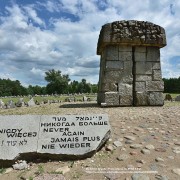