Monument to the Stalinist Constitution

The monument was devoted to the Constitution of the USSR of 1936. (Stalinist Constitution), in force from 1936 to 1977, which was the legal facade of the totalitarian communist system.

The monument stood in the city center, on one of the largest promenades in Lwow, right next to the monument to Jan III Sobieski, between Jagiellonska Street and Holy Spirit Square (now Hnatiuka Street and Iw. Pidkowy Square).

A provisional monument made of wood and plaster in the shape of a composition of columns to symbolize the Soviet constitution. In the lower part there are cement figures depicting a red-armer, a worker, a mother with a child, a student and an old peasant with a boy. The statues and inscriptions in Ukrainian, Polish and Hebrew symbolised the friendship of the nations of the USSR that was declared in the Constitution. On the pedestal there were emblems with a sickle and hammer.  At the top of the monument there was a mast with red flags.

17 September 1939 the USSR carried out armed aggression against Poland. After the capitulation on September 23rd, Lwow found itself under Soviet occupation. Apart from the political terror, from the very beginning the communist authorities conducted sovietization, also of the public space - according to the scheme applied in the whole USSR. One of the means of sovietization was renaming the streets and erecting monuments. Propaganda monuments were often temporary and were built of wood and plaster. Several of them were erected on Wały Hetmańskie, one of the most representative places in Lwow. For example, near the statue of Our Lady the monument 'Friendship of the nations of the USSR' was erected, and next to the monument of the Polish king Jan III Sobieski - the described monument of the Stalinist Constitution. It was erected in October 1939. (according to other sources in 1940). The authors of the project were the sculptor Sergei Litvinenko and the Kiev artist Mykhail Dmytrenko (although it is possible that they adapted the project made in Moscow to local conditions). The monument, created in the newly opened Ceramic and Sculpture Factory, was made by sculptors Yevhen Dzyndra and Andriy Kowerko and probably Yakov Tchaika.

The Soviet monuments became a playground for Lwów's batiars, who practiced their accuracy in throwing stones on them, easily smashing the fragile mass. However, the attempt by junior high school students to set fire to the monument of the Stalinist Constitution ended tragically - the Soviets arrested and murdered 22 students. In the spring of 1941, the Constitutional Monument was in very bad condition and seemed to be abandoned and neglected. Because of the rain, the plaster changed its colour, there were stains, and the flags placed on it faded. On June 30, 1941, Lwow was occupied by the Germans, who smashed the monument. The remains were used to fill in the funnels created by the German bombardments in Lwow. Nearby, the Germans erected the 'Adolf Hitler Ring' monument with an 'eternal flame' in 1943, which was later destroyed by the Soviets in 1944 during the second occupation of Lwów. After Lwow was incorporated into the USSR in 1952, a monument to Lenin was erected there, for which slabs from the cemetery of the Polish Defenders of Lwow were used. The Lenin monument was removed on September 14, 1990 by the Ukrainians who unveiled a monument to the Ukrainian poet Taras Shevchenko in its place in 1992. The nearby Jan III Sobieski monument survived the war and subsequent occupations and the intentions of the communist authorities to convert it into a monument to Bohdan Khmelnytsky (a national hero of Ukraine) and in 1950 it was moved to Poland (now it stands in Gdansk). 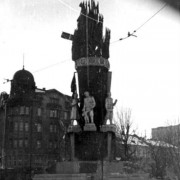