The monument is located at the side entrance to the Belvedere, on the square at the entrance to the Royal Baths, at the intersection of Ujazdowskie Avenue, Belwederska Street and Bagatela Street.

The inscriptions on the pedestal: 'Marshal Józef Piłsudski' (front)

'On the initiative of Jerzy Waldorff, this monument was unveiled / On 8 November 1998 on the 80th anniversary of regaining independence / The founders are: / Municipality of Warsaw Centrum, Municipal Road Administration in Warsaw / Wiesław Ciałkowski and other donors / Social Monument Construction Committee / Marshal Józef Piłsudski Warsaw 1998'. (back).

The sculpture (3.5 m high) is placed on a wide low granite plinth (1 m high) placed on an elevation (4 steps). Cast in bronze, depicting Józef Piłsudski standing with a mattress (a kind of cap), leaning against his sabre with both hands. Next to it, on a pedestal decorated with a crowned eagle, there is a marshal's buława. He looks down - serious, thoughtful.

The legend of Józef Piłsudski, tangled with the founding myth of the Second Polish Republic, was still being built during his lifetime. During the communist period, Piłsudski became an object of sharp attacks of communist propaganda. However, the campaign did not bring any results, and the Marshal's popularity in society was growing over time, although it no longer took the form of a common cult. After the fall of communism, there was a tendency to restore the name of Józef Piłsudski in public space, also by erecting monuments. The first initiator of the commemoration of Piłsudski in Warsaw was the city's president Stanisław Wyganowski in 1990. However, it did not come to existence. Another initiator was a music critic and social activist Jerzy Waldorff. In 1997, he initiated a money collection for the monument, donating the sum received in a poll of readers and radio listeners. He also postulated that the monument should be located near the Belweder Palace, where the Marshal held office and lived during his time in power, and where he died in 1935, and where the Józef Piłsudski Museum was located between 1935 and 1939. On 26 February 1998, the Municipality of Warsaw Centrum entrusted the task of designing and constructing the monument to the Association 'Social Committee for the Construction of the Monument of Marshal Józef Piłsudski' appointed by J. Waldorff and to the Mayor of Warsaw Marcin Święcicki. The erection of the monument was preceded by discussions on its location and form. The originally created monument, cast in the Gdynia Naval Shipyard, did not win the favour of the committee and conservator. Doubts were raised about the size of the monument and its careful execution. As a result of another contest, the monument was selected as a double-enlarged copy of a marble sculpture by the outstanding sculptor Stanisław Ostrowski (1879-1947), which was created before World War II and later stored in the Old Orangery in the Royal Łazienki Park. The new monument, cast from the bronze thanks to the Ministry of National Defence, which donated cannon shells for this purpose, was considered even less successful than the previous one. It was accused that the magnification in relation to the original, distorted its proportions in relation to the too low pedestal. Eventually, at the initiative of the construction committee and the authors, the first monument was erected at Piłsudski Square in Warsaw (52°14′29″N 21°00′50″E), arousing a lot of controversy over its location in the following years, and the second one (described) was alleged to be located near the Belvedere. On the 70th anniversary of regaining independence on 11 November 1998, the monument was unveiled by the Mayor, committee members and the Marshal's daughter, Jadwiga Piłsudska-Jaraczewska, in the presence of Warsaw citizens.

In 2006, on the initiative of Warsaw councillors supported by the Honorary Committee of the Year of Jerzy Giedroyc (where representatives of the highest state authorities sat), the square where the Piłsudski monument stands was named after Jerzy Giedroyc Square, one of the most important political and cultural activists of Polish political emigration after World War II, founder of the Institute of Literature and editor of the Parisian 'Culture', in his political thought often referring to Józef Piłsudski. By choosing such a location, the initiators wanted to consolidate in the social consciousness the figure of the patron and emphasize his 'consistent state-forming attitude and attachment to independence traditions'. In 2013, the management of the Józef Piłsudski Academy of Physical Education in Warsaw, with the support of the President of Poland, organized a patriotic-sports march addressed to the youth of the Warsaw schools and universities, interested in restoring traditions related to the Marshal. It was a symbolic reference to the tradition of marches from Sulejówek to Warsaw from the interwar period. One of the points of the program was the laying of flowers under the monument. The undertaking had a special ceremonial setting and, initially, a large social resonance, it was organized until 2016.

Currently, wreaths and flowers are laid at the monument as part of the central celebration of Independence Day on 11 November. The monument is one of 4 monuments commemorating Józef Piłsudski in Warsaw. 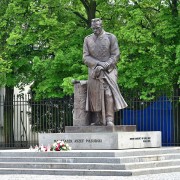