Monument to the Home Army and the Polish Underground State

The monument commemorates the Polish Underground State and its armed forces - the Home Army, operating in conspiracy during World War II in the areas occupied by the Third Reich and the USSR, ensuring the continuity of the Polish state.

The monument stands opposite the building complex of the Sejm of the Republic of Poland.

The inscription on the main monument:

TO YOU HOMELAND - HOME ARMY

The information board on the boulder: A monument to the Home Amry / And the Polish Underground State / completed in 1999 / by the Building Committee in the COMPANY: / list of 45 people in two columns / PROJECT ARCHITECTIVE PROF. ARCH. JERZY STANZKIS / CONSTRUCTION INŻ. EUGENIUSZ KUREK / ARCHITECTONIC DOCUMENTATION: ANDRZEJ BULANDA I WŁODZIMEIRZ MUCHA / CONSTRUCTION: MPB INSBUD S.A., PBiUT GRANIT SP. Z O.O. / HOLY FATHER JAN PAWEŁ II / 11 JUNE 1999 / MADE THE ACT OF CONSECRATION OF THE MONUMENT

The monument has the form of an abstract spatial-architectural construction. It consists of: an obelisk of reinforced concrete structure 32 m high, covered with slabs of Italian granite in light grey ("Bianco cristal"); a boulder with a marble board (91 x 105 cm); slabs in the ground (150 x 100 cm), a monument of concrete cubes (about 3 m high).  On the semi-circular bastion were the names of all the institutions of the Polish Underground State, the names of the leaders, the names of districts of the Home Army and the Delegate of the Polish Government. The assumption is illuminated by headlights mounted in the ground.

1 September 1939 Poland was attacked by the Third Reich, and on 17 September by the USSR acting in agreement with it. In the face of overwhelming enemy forces, the Polish Army was defeated, but Poland did not officially capitulate. In the occupied territories on September 27, 1939, secret structures of the Polish state were created, subordinated to the Polish Government in exile. The Polish Underground State had an underground armed forces - the Home Army. It operated until July 1, 1945. After World War II, when Poland found itself in the Soviet zone of influence, the underground activists were subjected to repression and surveillance, and the image of Polish Underground State and Home Army was falsified by communist propaganda. A proper commemoration of Polish Underground State became possible after the fall of communism. Efforts to erect the monument were initiated by the appeal of the Warsaw insurgent Stefan Bałuk, 'To all Polish citizens' published in 1989 in 'Gazeta Wyborcza'. In 1990 the Committee for the Construction of the Monument to the Mausoleum of the Home Army was established. On his order, in 1993 and 1997, competitions for the design of the monument announced by the Association of Polish Architects were held. However, their results were not satisfactory for veterans. Eventually, the project of architect Jerzy Staniszkis won. After resolving the controversy over the location, the cornerstone was laid on August 2, 1994. (the day after the 50th anniversary of the Warsaw Rising). The location of the monument near the Sejm was to symbolize the continuity of the Polish state, whose most important institutions operated despite the occupation conditions. The construction of the monument was largely financed by contributions from former Home Army soldiers from Poland and abroad. On 10 June 1999, the monument was solemnly unveiled by the Speaker of the Sejm, Maciej Płażyński. The ceremony was preceded by a mass celebrated by the Polish Primate Cardinal Józef Glemp. A day later the monument was consecrated by Pope John Paul II.

Since the unveiling at the monument, ceremonies have been held to commemorate the anniversaries of the outbreak of the Warsaw Rising (the largest military operation of the Home Army) - 1 August, and since 1998 also on 27 September, the Day of the Underground Polish State (established that year by the Polish Parliament).

The monument plays an important role as one of the points of the above-mentioned central anniversary celebrations. It is attended by representatives of state and Warsaw authorities, the army, veterans, scouts and citizens. 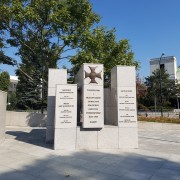 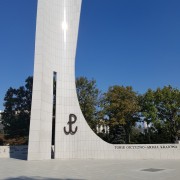 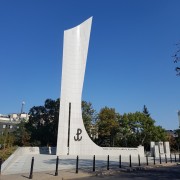